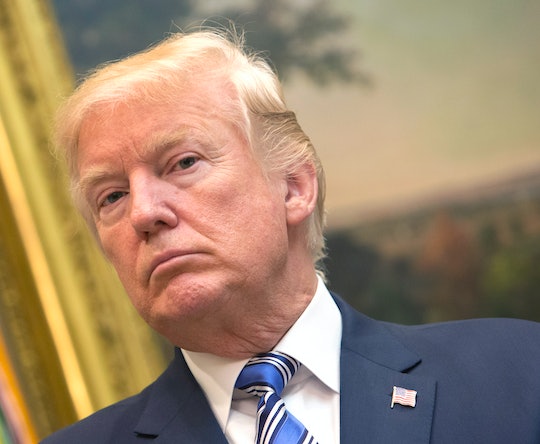 As the public threats between President Donald Trump and North Korea grow increasingly more harsh, the world is starting to seriously question whether a social media feud could turn nuclear. Neither Trump nor Kim Jong-un seem willing to back down, but can Trump declare war over Twitter? And will he? The United States and North Korea's leaders are two very proud men, both seemingly determined to have the last word. One wonders if that word will be, "Fire."

Before discounting the idea, consider that even Pentagon officials consider it a possibility. When Trump announced his transgender military ban through a series of tweets in July, there was a nine-minute span between the first and second tweet. According to BuzzFeed, during the time it stood alone, some military leaders feared that Trump's initial statement, "After consultation with my Generals and military experts, please be advised that the United States Government will not accept or allow......" was the beginning of a declaration of war on North Korea, rather than transgender service members. Tensions between the United States and North Korea have escalated in recent weeks amid reports of the latter country's efforts to produce a nuclear missile capable of hitting the U.S. mainland.

In late July, North Korea tested an intercontinental ballistic missile that could have a range as far as New York or Boston, according to CNN. After the U.N. Security Council approved new economic sanctions as punishment, a spokesperson for the country vowed, "We will make the U.S. pay by a thousand-fold for all the heinous crimes it commits against the state and people of this country," according to a statement obtained by the Associated Press. On Tuesday, the Washington Post reported that North Korea is now capable of producing miniaturized nuclear warheads that can fit into its missiles, the last piece of the puzzle.

Speaking from his New Jersey golf club that same day, Trump addressed the Post report: "North Korea best not make any more threats to the United States. They will be met with fire and fury like the world has never seen," according to CBS News. A spokesman for the Korean People's Army responded by saying that it was "now carefully examining" a plan to attack U.S. military bases on Guam, and cautioned the United States from further "reckless military provocation" under the threat of "all-out war wiping out all the strongholds of enemies, including the U.S. mainland," according to Reuters.

Whereas other leaders might have chosen to disengage and let North Korea get the tantrum out of its system, Trump spent the early hours of Wednesday tweeting further provocations. He began by retweeting several tweets from Fox & Friends around 3:00 a.m., the first of which boasted the U.S. Air Force's ability to "fight tonight" as jets took off from Guam. Another emphasized "U.S. power" over North Korea, and yet another featured a video of Trump's "fire and fury" statement. Around 8:00 a.m., Trump posted two of his own tweets, writing,

My first order as President was to renovate and modernize our nuclear arsenal. It is now far stronger and more powerful than ever before ... Hopefully we will never have to use this power, but there will never be a time that we are not the most powerful nation in the world!

But how far will he go? It's true that only Congress can officially declare war, and even the transgender ban tweets weren't actually legally binding, but Trump still has the authority to commit acts of war, such as launching missiles, without congressional approval. Even if Trump doesn't want to draw first blood, his continual taunting could goad North Korea into striking first. Nearly five years ago, Trump bragged, "My twitter has become so powerful that I can actually make my enemies tell the truth." Now that he's the president, it might just be powerful enough to start a nuclear war.