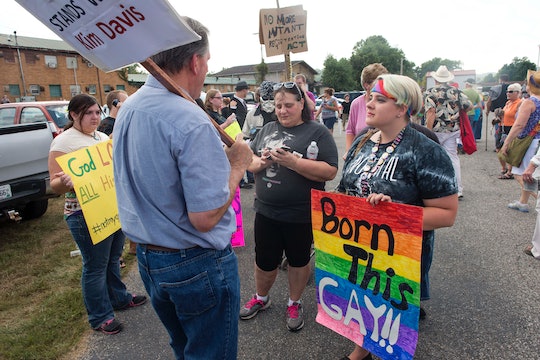 Can Trump Repeal Same-Sex Marriage? The Answer Is Complicated

Donald Trump's victory in the 2016 presidential election has created a culture of fear within the LGBTQ community, members of which are worried about what the election results could mean for them after years of enjoying political gains during the presidency of Barack Obama. Among their primary concerns is one question: Can Trump repeal same-sex marriage?

Throughout his campaign, Trump often indicated a willingness to put an end to many of Obama's progressive policy decisions should he be elected president, including executive orders that provide protections for both transgender students and for LGBTQ individuals employed by federal contractors. However, Trump's plan for his first 100 days in office, released in October, does not reference same-sex marriage, "Don't Ask, Don't Tell," or anything else related to the LGBT community — that is, at least not directly. Nevertheless, it does include the following language, according to PBS:

Additionally, on the first day, I will take the following five actions to restore security and the constitutional rule of law: * FIRST, cancel every unconstitutional executive action, memorandum and order issued by President Obama; * SECOND, begin the process of selecting a replacement for Justice Scalia from one of the 20 judges on my list, who will uphold and defend the Constitution of the United States ...

While Trump's plan for his first 100 days in office doesn't specifically mention the repeal of same-sex marriage, it does double-down on his earlier promise to nominate a conservative justice to fill the vacancy left by the sudden death of Antonin Scalia in February. During an interview on Fox News later that month, Trump said he disagreed with the 2015 Supreme Court decision that the U.S. Constitution guarantees a right to same-sex marriage and indicated he would appoint judges to help overturn the ruling:

It has been ruled upon. It has been there. If I’m elected I would be very strong in putting certain judges on the bench that I think maybe could change things, but they have a long way to go. ... I disagree with the court in that it should have been a states’ rights issue. This was a very surprising ruling. I can see changes coming down the line.

Still, overturning same-sex marriage can only happen in one of three ways, according to Reference.com:

None of these avenues appear likely in a Trump administration. Given the changing tide of public opinion about same-sex marriage — according to the Pew Research Center, a majority of Americans now support marriage equality — it's improbable the states would seek to amend the Constitution, nor is it expected Congress will try passing new legislation to outlaw the practice. In addition, all five justices who ruled in favor of marriage equality are still on the bench. Even if Trump succeeds in appointing a conservative justice, there's no reason to assume the court will decide to revisit the issue.

It is important to note, however, that President-elect Trump can easily nullify existing executive orders pertaining to the LGBT community, such as the aforementioned guidance on transgender facilities in schools. He could also decide that LGBTQ people can no longer serve in the military, though the Human Rights Campaign says that is "exceedingly unlikely."

Besides adopting a "wait and see" approach as Trump's inauguration draws closer, take comfort in the words of Mara Keisling, the executive director of the National Center for Transgender Equality: