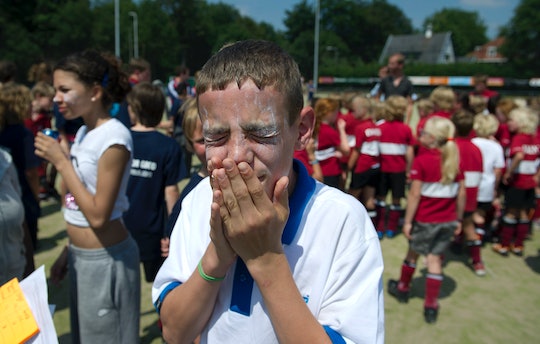 Can Sunscreen Keep Your Kid From Getting Vitamin D?

Parents have been taught for years that effective sun safety begins while kids are young. Apply sunscreen generously 15 minutes before kids head outdoors, and don't let them go more than two hours without reapplying. This will save them from painful burns and skin damage, and lower their chances of getting skin cancer. But new reports are now claiming that using too much sunscreen can hurt kids' vitamin D levels, according to Slate. So what's the truth here? Can using too much sunscreen keep your kid from getting vitamin D, or is your frequent sunscreen re-application still getting the thumbs up from experts?

As it turns out, yes, protecting kids' skin religiously from the sun — especially with higher SPFs — can interfere with their absorption of vitamin D. And that's a problem, since most children in the country aren't maintaining healthy levels of vitamin D, which can help them stave off rickets, heart and bone disease, bone fractures, and calcium deficiency. In fact, one 2009 study that looked at over 6,000 American children found that around seven in 10 kids have low levels of vitamin D, according to Science Daily.

"Vitamin D levels have declined over the last 20 years," Dr. Michal L. Melamed told Science Daily. "Kids have more sedentary lifestyles today and are not spending as much time outdoors. The widespread use of sunscreens, which block UV-B rays, has only compounded the problem."

However, that doesn't mean you should actually stop using sunscreen on your kids' sensitive skin. Unfettered exposure to the sun increases children's later risk of skin cancer, and getting just one blistering sunburn as a child can double their risk of developing melanoma later on, according to the Skin Cancer Foundation. (Off-topic, but you should also get your kid some cool sunglasses, too, since their young eyes can't filter ultraviolet radiation as readily as adult eyes can.)

So what's the happy medium between protecting your kids' skin and ensuring they get their fill of vitamin D? Luckily, there's no need to compromise. The American Academy of Pediatrics recommends children — from toddlers to teens — get at least 400 international units of vitamin D a day, and that can easily be taken in a supplement. (While there's plenty of food that carries a hefty dose of vitamin D, it's usually food that kids are rather adverse to, like fish and their fatty oils.)

If you're worried that your children aren't getting enough vitamin D in their diet — and you rightfully don't want to expose them to the dangers that come with a lack of sunscreen — you can give your kids calcium supplements alongside one of their meals. With that taken care of, you can feel free to continue slathering sunscreen on your kids as they head out into the summer sunshine.