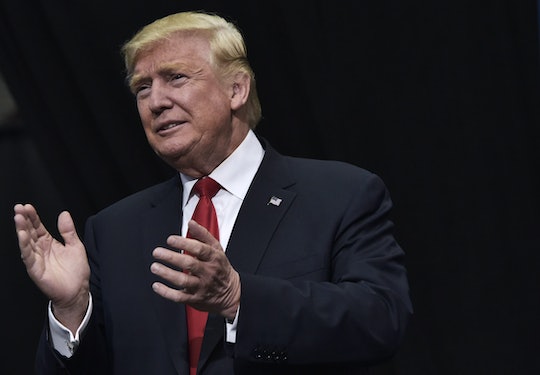 Can Voters Stop Donald Trump From Becoming President? The Process Is Complicated

Election Day has finally come to pass and the decision made by the American voters was not a popular one, depending on who you ask. So voters made a mistake — which is understandable, accidents happen all the time. But now that the damage has been done, is there any way that voters can stop Donald Trump from becoming president? Unfortunately, it seems that there is only one way to stop Trump from taking office before Inauguration Day on Friday, Jan. 20 — and it might be out of the hands of the American people.

Voters already did a lot to get Trump in office — millions of Americans took to their local polling places before and on Nov. 8 and decided that Trump was the better candidate to lead the nation as the president of the United States of America. They decided that Trump's policies were better than his opponent, Hillary Clinton's and that his was the better temperament. However, as their counterparts across the way realized the day after the now-infamous Brexit, voters in the United States may now believe that they might have made a mistake (it is understandable, given Trump's dramatic victory speech on Tuesday night).

Now that the panic has set in, unfortunately, there aren't too many ways for voters themselves to stop Donald Trump from taking office come Inauguration Day. Instead, they'll have to rely on their higher-ups for that.

According to The Washington Post, Trump could still lose the election, despite him winning the popular vote on Election Day. This is because (while every vote counts) the Electoral College is the group of people that really elects the President of the United States in December. The 538 electors will gather in December and vote for the POTUS — after that, Congress then counts the votes and determines who has won the majority. According to The New York Daily News, if the electors are not happy with the candidate who won the popular vote (Trump), with enough people, the Electoral College could hypothetically give Clinton the victory or vote for someone else and not give Trump the majority (though this is highly unlikely).

If the Electoral College places its votes elsewhere and no one wins the majority, the decision then goes to the House of Representatives, which selects the winner. According to The Washington Post, "each state's delegation of representatives gets one vote and selects among the top three electoral vote getters." Therefore, the representatives can select another candidate, which according to New York Daily News, could be someone like Speaker of the House Paul Ryan or Vice President Joe Biden.

The Electoral College has never gone against popular vote before. Therefore, according to The New York Daily News, it is likely that Trump might sue — because everyone knows that Trump loves his law suits. But once the lawsuit goes to court, there is no telling what would happen if Trump were to win this hypothetical battle, or vice versa, who would be president if he didn't.

There is also the possibility that Trump could be impeached once he becomes president. However, according to Politico, impeachment is "a rarely used highly disruptive tactic that would throttle pretty much everything happening from a federal policy perspective in the country." In order to impeach Trump, Trump as president would have to "commit treason, bribery, or other high crimes and misdemeanors." The impeachment process is long, complicated, and arduous — but if the person is convicted by Senate, they could be immediately removed from office.

Unfortunately, for the common citizens and voters in the United States, there is not much that we can do now. But the Electoral College was put in place by our founding fathers for this very reason — to stop the majority of voters from making a rash decision. At this point, if you're a part of the population that's unhappy about the new Trump presidency, the Electoral College is really your only hope.