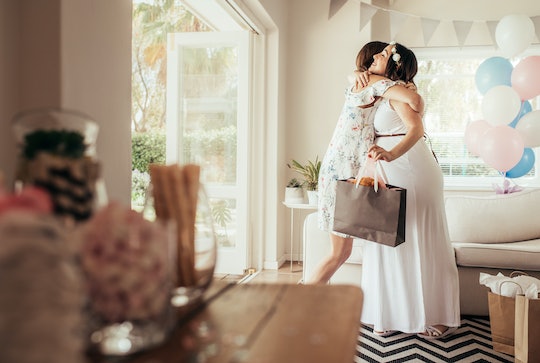 If Your Sister Wants To Be Your Surrogate, Here's What You Should Know

With all of the fervor surrounding the possibilities that Kylie Jenner is actually Kim Kardashian West's surrogate, much online chatter has revolved around the process of surrogacy. It's a complicated process with a lot of potential landmines both ethically and legally. However, in the case of sibling surrogacy, it seems as though it should be easier as there is already a familial bond present. However, that might not always be the case. It begs the question, can you be a surrogate for your sister? What would that mean?

There exists more than one type of surrogacy, and that plays a big role in both the mechanics of the surrogacy and the legal contracting required, according to Surrogate.com. The most common type of surrogate is what's referred to as a "gestational surrogate," which means that the surrogate is implanted with an embryo that is not comprised of her own egg. The second type of surrogacy is called "donor surrogacy," and it involves the surrogate being artificially inseminated with donor sperm, delivering the child, and then handing over all rights to that child knowing that it's hers biologically. Both of these types of surrogacies are usually legal between siblings in all 50 states, but it is addressed on a case-by-case basis and attorneys must be contacted before the process can even begin.

I decided to speak to a good friend of mine, Professor William Wu of Brooklyn, New York, about the sibling surrogacy process, as his husband's sister is currently acting as their gestational surrogate, due with twins practically any minute. He tells Romper that it was a long, involved process. "I thought she'd never get pregnant, and it was all because New York has really strict laws about surrogacy, even though she was doing it for her brother." New York is notoriously stringent on surrogacy, and Surrogate.com labels it an unfriendly state. In New York, there are rules prohibiting compensation, there are myriad rules around donor surrogacy, mandatory counseling, and briefs that need filed before you can even begin the process.

Wu says, "Our surrogate is in peak physical condition, of sound mind, and really on about being an aunt, and it was months before we even got approved for her to start the hormones." He's talking about the hormones prescribed — estrogens and progesterones, noted Circle Surrogacy — that jumpstart the body's readiness to accept the embryo. I asked Wu what the process was like and he says, "She had to do a lot of basic physical check-ups. Several blood tests, a stress test, and an obstetric exam were all required before the process could begin. I felt awful about the whole thing, but also grateful to know she'd be healthy, and so would our child. Even though she was healthy through four other pregnancies, I still worry."

Can you be a surrogate for your sister if you've never had children? Probably not. According to Surrogate.com, most agencies, states, and reproductive endocrinologists require that gestational surrogates have had at least one live birth. This is for myriad reasons, but chiefly, to determine you can have a live birth. They want to know if your pregnancy was free of complications like preeclampsia, they want to know if you can deal with the subsequent emotional problems that may occur postpartum, and they want to make sure your body can handle the strain of pregnancy. However, if you have been pregnant, and had your tubes tied because you didn't want any more children yourself, you can still be a surrogate.

Surrogacy is a big decision and shouldn't be made lightly. It will drastically change your life and your relationship with your sister forever. It can be a true gift and a bit of a curse, depending on how it turns out, but it is possible to be a surrogate for your sister if you're willing and able.

More Like This
Here’s What It Means If You Give Birth During A Solar Eclipse
You'll Feel Like A Princess In These Gorgeous New Year's Eve Maternity Dresses
7 Things Pregnancy Dreams Can Mean If You're Not Pregnant
Can You Get Out Of Jury Duty For Pregnancy? Here's The Verdict