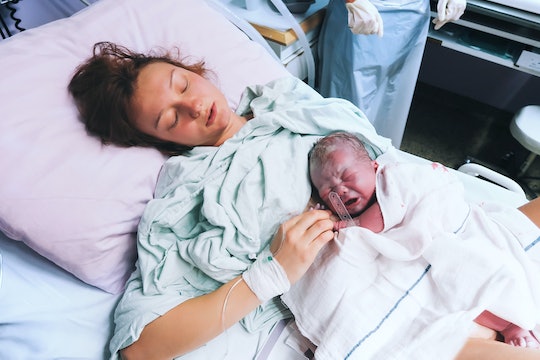 Here's The Deal With Being Completely "Out" During Childbirth

The concept of being awake and conscious while pushing a human out of a tiny hole can be, well, terrifying. I mean, I can barely deal with the pain that accompanies my period cramps. A low pain tolerances combined with straight up fear can lead women to wonder can if you can be completely "out" during birth and essentially wake up to a baby in your arms.

Although there are many women who are strongly opposed to the idea of being unconscious during their child's birth, there are just as many who would prefer to be unconscious during their baby's birth so as not to associate their future child with a pain and agony. Unless you opt for a "natural" childbirth, in which you receive no medications to manage the pain, you will likely receive some form of anesthesia. The most common, epidurals, are spinal anesthesia that numb from the waist down, according to the American Pregnancy Association. There are also other forms of anesthesia that a pregnant woman can be given, depending on the specific circumstances. In order to be completely unconscious, however, you would need to be given a general anesthesia. And the odds of that happening are slim.

According to the American Pregnancy Association, many physicians are reluctant to provide pregnant women with general anesthesia because their active participation is believed to be an important part of the childbirth process. Additionally, WebMd noted that general anesthesia should only be used during emergency C-sections, because of the risks to both the mom-to-be as well the baby,

What are these risks? Well, to start, general anesthesia could compromise your oxygen levels and also cause your baby to experience respiratory depression, according to Healthline. You could also end up vomiting, aspirating it, and developing a serious lung infection like pneumonia, according to Sparrow Health System.

According to a Baby Center community board poster who said she regularly works with OB-GYNs, it's uncommon for a physician to agree to general anesthesia unless it's truly an emergency. According to posters on a Just Mommies board, however, some doctors will consider it on a case-by-case basis, like if the woman who has severe anxiety and nothing else seems to work to minimize it.

Although a doctor likely won't present general anesthesia as a viable, elective option for childbirth, you could always broach the subject with your doctor if it's something that you're feeling beyond anxious about. They'll be able to give you all of the information you need to know, whether there's a true need for general anesthesia or you just need to feel more at ease about what's to come.