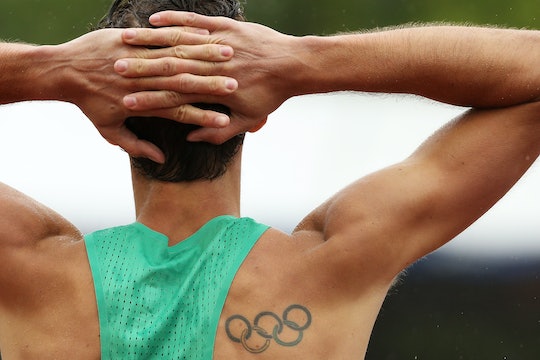 Can You Be Disqualified For Getting A Tattoo During The Olympics? It's Possible

For athletes around the world, the Olympics are the ultimate rite of passage — so the thought of being disqualified from them would be nothing short of a nightmare. Those who make it to the games can be disqualified for numerous trespasses, both big and little: If athletes wear high-tech gear, step on lane lines, or — more obviously — get caught doping, they're out. But what about that one rumor that went around for a while? Could you actually be disqualified from the Olympics for getting a tattoo?

The rumor began after British Paralympic swimming champ Josef Craig was disqualified from the IPC European Championship earlier this year, due to his new tattoo. However, his disqualification had less to do with the fact that he had a tattoo than it did with the content of the tattoo: Craig's tattoo depicted the famous interlocked Olympic rings, rather than the Paralympic logo. Since the Paralympic Games are entirely separate from the Olympic Games and run by separate committees, the International Paralympic Committee categorized his tattoo as an advertisement for another event. Under Paralympic (and Olympic!) rules, athletes are not allowed to display advertisements on their bodies, so Craig was unfortunately cut from a final. He also had to cover up the offending tattoo at his following Paralympic race.

Olympic athletes headed to Rio on Aug. 5, however, need not worry. "We take a common sense approach to tattoos whatever they are," an IOC spokesperson told Reuters in May. That means Olympians are allowed to sport personal tattoos — including the Olympic rings — as long as the ink doesn't advertise for corporations (in other words, you might want to rethink the Coca-Cola shoulder ink if you have Olympic dreams).

As for getting a tattoo during the Olympics, it's unlikely that athletes would get inked while competing. Romper reached out to the International Olympic Committee to find out if getting tattooed during the Olympics is allowed, but — regardless of rules — it seems like a scenario most athletes themselves wouldn't consider.

It takes about two weeks for a tattoo to heal, and until it does, you're dealing with an open wound. Most coaches wouldn't recommend going into the Olympics with scabs that could break open or with an obligation to care for fresh tattoos. Chances are most athletes are getting inked pre- or post-competition, not one race in. But when athletes do snag that final gold medal, they can happily — and fearlessly — head off to get inked.