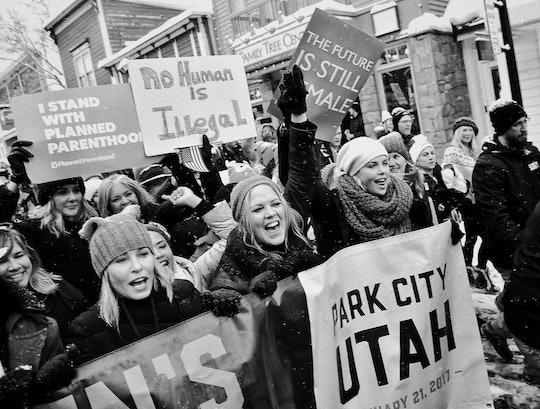 The Women's March on Washington made headlines after millions of people gathered in the nation's capital and other cities around the world Jan. 21 — aka, the day after President Donald Trump's inauguration — in support of women's rights and civil liberties. The success of the march (and its associated "sister marches") has been considered by many to be the start of a growing grassroots resistance, and now, organizers are looking ahead to the next step: a general strike scheduled to take place on Mar. 8. The "A Day Without A Woman" strike could have a major impact, but can you be fired for striking? It's a concern of many would-be participants, and without specific details surrounding the legality of the strike as it relates to United States labor law, it definitely sounds like that concern might be warranted.

According to New York Magazine, the women's strike was originally proposed by a group of feminist scholars and activists in an op-ed piece for The Guardian that ran on Feb. 6. The group called for “a day of striking, marching, blocking roads, bridges, and squares," to protest the "ongoing neoliberal attack on social provision and labor rights." Specifically, they recommended that the strike should involve women "abstaining from domestic care and sex work, boycotting, calling out misogynistic politicians and companies, [and] striking in educational institutions."

The ultimate goal, the group argued, would be to use the already-established momentum of the Women's March to support not just the needs of some women, but those of all women:

The idea is to mobilize women, including trans women, and all who support them in an international day of struggle ... These actions are aimed at making visible the needs and aspirations of those whom lean-in feminism ignored: women in the formal labor market, women working in the sphere of social reproduction and care, and unemployed and precarious working women.

That message is an important one — and one that Women's March organizers have since signed on to support. In an Instagram post Tuesday, they announced the March 8 strike, and wrote, “We saw what happened when millions of us stood together in January, and now we know that our army of love greatly outnumbers the army of fear, greed and hatred.”

Already, many have supported the plan, and the numerous successful examples of general women's strikes in other countries seem to be fueling, at least in part, some of the optimism surrounding it. The 1975 women's strike in Iceland, for example, resulted in as many as 90 percent of women in the country walking away from both their paid and unpaid work for a day, according to Vogue, and the strike's success is one reason why Iceland is considered to be one of the world's most feminist countries. More recently, women in Poland made a major political statement when more than 100,000 of them went on strike on Oct. 3, 2016 to protest against a proposed national ban on abortions, and a month later in Argentina, thousands of women took to the streets to protest femicide — something that ultimately led to a new law designed to increase protection for women against violence.

The problem, though, is that walking away from your job for a day can have consequences, especially for those who are in precarious working conditions, and those who are already struggling to provide financially for themselves or their loved ones. Although the National Labor Relations Act protects American workers' right to strike, there are exceptions to that protection, and unless the proposed women's strike can meet the criteria for a legal strike, there may not be any way to guarantee that those who participate in the March 8 strike won't be fired for doing so.

According to the National Labor Relations Board, strikes are generally considered by the Act to be lawful if they are protesting for economic reasons — like wages, working hours, or working conditions — or if they are protesting unfair labor practices. In both cases, employees are protected from being discharged, but general or mass strikes (like the women's strike) that are not linked to specific employment issues seem to be a different matter, especially in the United States.

That's because, according to the National Conference of State Legislatures, employment relationships in all states except for Montana are considered to be "at-will." That means that, while workers are legally free to leave their jobs for any reason at any time, employers are also allowed to terminate workers without cause, so long as they have done so legally. And since participating in the women's strike could be seen by employers as an example of workers literally just not showing up for work, it seems totally possible that it could be used as grounds for dismissal.

Perhaps unsurprisingly then, many on social media have taken to arguing that the women's strike likely won't be particularly successful, especially if the whole point was to encourage support of disadvantaged women in the workforce, and those who perform unpaid work at home, like mothers and caregivers.

That doesn't mean there isn't hope for the strike, though. If the organizers can make a successful argument in favor of the legality of the event, for example, the threat to workers could presumably be diminished. And then there's the fact that, having a strike take place at all — even if only those who have the flexibility or financial ability to actually step away from their work for the day can participate — would still have the potential to send a message about fairness and equality. After all, what does it say about the country's labor practices, particularly in relation to women, if it's not even legally possible to protest against them without the threat of severe consequences?

Ultimately, those concerned about participating will need to make sure they aren't risking their employment without even realizing it. But if the success of the March on Washington is any indication — and it likely is — it doesn't seem like anyone should be automatically counting out the women's strike just yet.