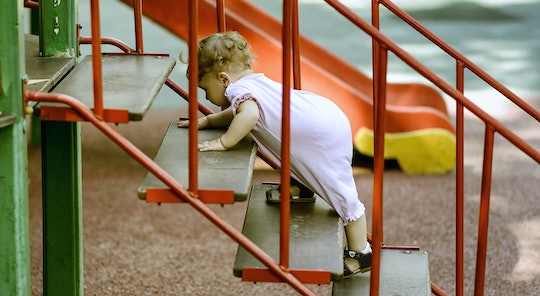 Back in the days before "helicopter mom" was a catchphrase and kids spent their days running around outside with little to no supervision, the question of whether or not parents could be too involved in their children's lives wasn't a common concern. Fast forward to now, when wearable GPS trackers for kids are a popular purchase and even colleges are adjusting policies to accommodate overly controlling parents, and the question becomes a legitimate one. Is there such a thing as too much parental involvement? How much space should we be giving our kids?

We chose to explore this increasingly polarizing topic of parental involvement for an episode of our Bearing the Motherload video series, in which two parents with different takes on the same issue sit down with a mediator to discuss their own point of view and to gain some perspective on the other's parenting perspective. Experts are also consulted to weigh in on the pros and cons of heavy parental involvement — what they had to say might surprise you (particularly if you're in the helicopter camp).

The urge to hover over our children's every move is certainly an understandable one, particularly when they're very young or have recently entered the smart phone phase (virtual predators are at least one thing our parents didn't have to worry as much about). But this obsessive desire to keep them safe could actually end up hurting our kids in the long run, Dr. Marcia Sirota, a psychiatrist and author specializing in relationships and childhood trauma, tells Romper.

"The pros of being very involved are few and the cons are many," she says, and describes the negative effects as such — interestingly, it affects parents too:

Parents becoming more anxious and exhausted because they're constantly aware of what their kids are up to and ready to intervene at a moment's notice; children who are never allowed to experience independence; never allowed to develop self-confidence or pride in their ability to solve problems.

Of course none of us intend to make our kids ineffectual by micro-managing their lives, but that's exactly what's happening to far too many young people today. "These children become overly dependent on their parents for every little thing and then as young adults are completely unable to cope with even the smallest of challenges," Dr. Sirota explains.

As parents, we feel like it's our job to make sure our kids grow up happy and successful, so allowing them to fail or get hurt can seem completely counterintuitive. But the uncomfortable truth is, children need to experience hardships in order to be happy and successful.

"Children learn self-reliance, and how to recover from failure, when they are allowed to be given autonomy incrementally throughout their development," Marriage and Family Therapist Meredith Shirey, MS, LMFT, tells Romper.

It's incredibly painful to watch our kids suffer, so it's natural for us to want to protect them. But, as Shirey explains, we might be unwittingly causing them future pain in the process by not allowing them to learn that failure is a normal part of life — and, more importantly, that they have the ability to bounce back.

It doesn't help that our educational system (and society in general) is constructed in such a way that setbacks of any kind are perceived as potentially catastrophic. That's why so many of us find ourselves stepping in when our kids get a bad grade or get benched at a game — chances are all the other parents are doing the same thing, so how else are our kids supposed to keep up? But these attempts to protect our kids can backfire, oftentimes in ways we might not expect.

"Boundary setting is another giant con to over-monitoring," says Shirey. "Giving children privacy, especially as they age and mature, models respect for personal boundaries. It sends the message that asserting oneself is a normative response."

Shirey agrees that giving kids the space they need and the tools to set their own boundaries is key in setting them up for a lifetime of good habits. Case in point: "If a parent constantly monitors a child’s homework or studying habits, the child might not have the self-motivation in college to complete tasks without the watchful eye of their parent," she says.

Granted, there are downsides to giving our kids too much space, too.

An absence of order at home can make it difficult for kids to adapt when they're expected to function within the confines of society, Shirey says, which can make it less likely for them to succeed in school and at work:

"The lack of structure and monitoring may make it difficult for those children to operate within the structures that exist in the outside world. Think about being able to set your own rules and pace, then being told you have to follow the guidelines of someone else," she says.

Even as adults, she continues, we tend to resist being in situations where we feel controlled. But for kids who have no structure at home, any kind of limiting expectations can be perceived as a threat to their autonomy, which can result in difficult or oppositional behavior. Over time, this can turn into a problem.

"Anxiety, especially manifested in adulthood, is common among children who grew up with overly permissive parents," says Shirey.

"Sometimes the lack of structure, while believed to be communicating unconditional acceptance by the parents, may actually be interpreted as aloofness or apathy by the child," she describes, resulting in attachment issues when the children become adults. "These children may be more anxious and less trusting of others, misread emotions or social cues, or express fears of abandonment because of their lack of perceived secure attachment in childhood."

Free-range parenting can even come with negative legal implications (for the parents, at least). Though since 2016, the Every Student Succeeds Act has protected the rights of kids to walk or go out alone, we've all heard our share of stories about parents who were arrested or whose kids were picked up by Child Protective Services simply because they were playing or walking outside by themselves. So it's not a bad idea to check out your individual state's legal guidelines on the age guidelines for when children can be left home or in the car unattended. (The laws vary widely by state, with some states not even having any official regulations on the books — FreeRangeKids.com has a helpful list here).

Then, of course, there are the immediate (and physical) consequences to consider of giving kids space.

"The cons of being more 'free range' are that kids could get hurt," adds Dr. Sirota.

"But that's part of life," she adds. All the bumps and bruises Sirota experienced doing "normal" kid activities, from biking, skate-boarding, and just generally running around, only made her stronger and taught her about her own limitations. "I grew up confident, tough, resilient and secure within myself. I learned how to take care of myself and exercise appropriate caution. also developed great courage, curiosity, creativity and an adventurous spirit that wasn't dampened or destroyed by over-protective parenting."

That said, the line between neglect and freedom is a very fine. "Naturally, kids need a certain amount of nurturing, guidance and protection," says Sirota. "Neglect is never good, but I’d say that smothering is worse because at least the neglected child learns how to stand up on their own two feet."

Ultimately, Shirey agrees, the "take home message" is that either extreme — over or under-involved parenting — will result in negative long-term effects. But at the end of the day, allowing our children the space and privacy they need and deserve is the goal.

"Parents who allow their children space to make their own decisions, even if it means experiencing failure, are paradoxically showing far more selfless love and care to children than those who engage in helicopter-style parenting," says Shirey.

Confidence, resilience, courage: These are traits every parent (hands-off or hands-on) wants their child to develop. And meeting somewhere in the middle is the way to help them along.