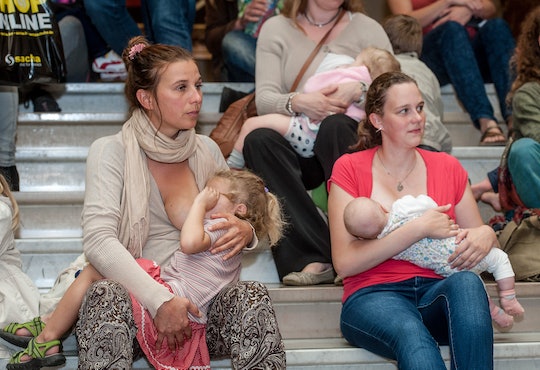 As many moms know, having a baby while you're young is stressful, to say the least. There are many decisions to be made, from breastfeeding to bottle-feeding, and living at home or out on your own. Whatever you decide, though, unfortunately some decisions have already been made for you. For moms in college, the right to breastfeed your child in class is complicated, and dependent upon a lot of variables. But you should know that you do have rights.

As of 2014, women have the right to breastfeed publicly in every state in America, except Idaho. However, even if you live in a state with lenient breastfeeding laws, different rules may apply to women who wish to breastfeed on college campuses, especially in the classroom.

A woman may breastfeed her child in any place open to the public on campus or any place the mother is otherwise authorized to be, and that this cannot be considered a nuisance, indecent exposure, sexual conduct, or obscenity.

Nevertheless, student mothers should be diligent in researching their university's rules regarding breastfeeding in class. Especially those moms who attend a private or religious school.

While much progress has been made in the realm of women breastfeeding in public, with even the Pope agreeing that it should be allowed, some places are still behind.

Because many of the laws allowing women to breastfeed in public are vague, and sometimes don't protect women from being harassed for breastfeeding, navigating this legal territory can be tricky.

However, if you live in a state that allows public breastfeeding, you should be able to find a solution that works for you. Talk to your professors at the beginning of the semester to explain to them your situation (hopefully most won't have an issue with it). Tell them that you're aware of your rights to publicly breastfeed, and if you experience any pushback, tell them that you're prepared to talk to someone in administration if someone denies you those rights. No one wants to fight, especially when school is already so draining, so the odds should be in your favor.

Being a student mother is already stressful. You've got so much to balance and work for, being able to properly feed your child shouldn't be something you have to worry about. Educate yourself on your breastfeeding rights and stand strong in your convictions. You're already making the brave choice to go to school and raise a child, don't let anything, or anyone, get in your way.