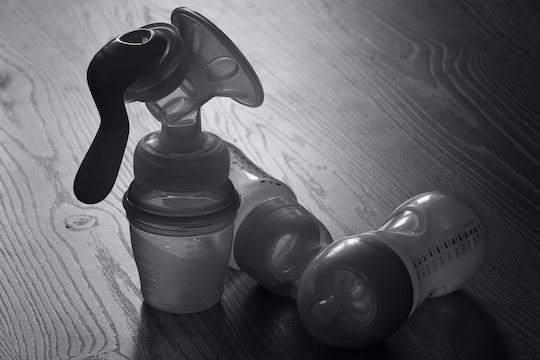 Can You Breastfeed On Anti-Depressants? Doctors Say It Depends

The postpartum period can be the most challenging and confusing period of a person's life. It can also be incredibly lonely and isolating. According to the CDC, 10 to 15 percent of women suffer from postpartum depression, or PPD, after giving birth. And although most care providers screen for PPD during follow up visits, many people may be embarrassed to admit that they’re not exceedingly happy to have a new baby. Plus, if a parent is nursing, they may worry about the health of their baby if they go on medication. Can you breastfeed on antidepressants?

The answer is not as straightforward as it seems. Particularly in a culture that shames parents — particularly mothers — for everything they do, there may be a lot of guilt or shame around the idea of taking medication while breastfeeding a baby. The PPD may exacerbate that, as symptoms of PPD can include the fear or belief that you’re a terrible parent or that you will do something to harm your baby. And with ad campaigns being released that shame mothers who eat junk food while they’re nursing, is it any wonder that some might not want to even consider taking medications like antidepressants?

But a study in the Clinical Journal of Psychiatry showed that untreated PPD can have a negative effect on the mother-infant relationship and can negatively affect a mother’s functioning. According to the Mayo Clinic, symptoms of PPD can include feelings of hopelessness, excessive crying, irritability, fatigue, the fear that you are not a good mother, and inability to make decisions, among other things. And, although therapy is helpful in treating depression, some people need medication, too. There’s absolutely no shame in that.

A 2009 review of available research shows that each antidepressant is a little bit different when it comes to how much is found in breastmilk. But the research concludes that it cannot say whether the detectable levels of medication in breastmilk will have any short- or long-term effects on the kids. But a more recent study concludes that mothers should continue breastfeeding on antidepressants regardless. Research out of the Robinson Research Institute at the University of Adelaide, Australia suggests that mothers with PPD who take antidepressants have a higher chance of nursing their babies until at least six months.

A 2013 report by the American Association of Pediatrics determined that many medications are safe to take while breastfeeding — including most antidepressants. The paper refers parents to Lactmed, a database of toxicology information, for use in researching which antidepressants may be best to take while nursing. But some professionals say that this data is not strong enough to indicate that parents should breastfeed on antidepressant medications. The only thing that is clear is that no one can seem to agree on what’s best when it comes to nursing and antidepressants.

Ultimately, the decision to take medication will be one that you make between you and your doctor. Some people continue to nurse while taking antidepressants. Some choose to stop nursing to take medication. And some people choose to forego medication while they're nursing. Whatever you decide is the right decision for you and your family, and whatever you do, you are a wonderful parent.