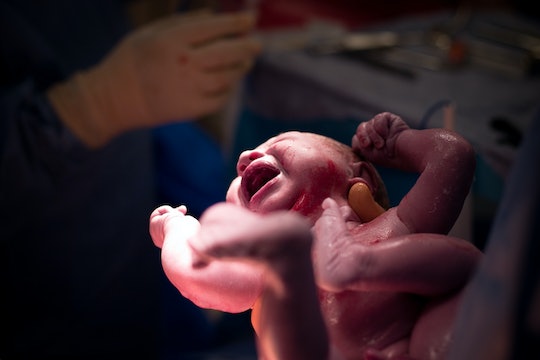 Here's The Truth Behind Breastfeeding After Having A C-Section

For most pregnant women, the idea of a C-section is, well, not ideal. Surgery can be scary, recovery is anything but easy, and there's the added anxiety surrounding breastfeeding that most new mothers — no matter how they give birth — experience. So it's no wonder so many moms-to-be try to avoid cesareans at all costs. One major question on a lot of women's minds is whether having a C-section impacts their ability to nurse. So, can you breastfeed right after a c-section, or do you have to wait?

The answer to this question, according to experts, is a resounding yes. If you are feeling up to it (you did just have major abominable surgery, you know), your doctor gives the OK, and your baby is healthy and doesn't need additional medical care, you can breastfeed immediately after your baby is born. According to the American Academy of Pediatrics (AAP) via their website, Healthy Children, "the method of delivery has little effect on your ability to nurse your baby." The site goes on to explain that sometimes the disappointment of not having had your ideal birth plan realized can affect your initial let-down of breast milk, but that your milk should come in just as readily as a woman who delivered vaginally.

Some women worry that the anesthesia administered during the C-section surgery, as well as any other pain medications prescribed post-birth, could affect their milk. The site Kelly Mom states that these medications should not affect your milk, but suggests talking to your doctor in advance about medications that are breastfeeding friendly.

The biggest challenge to nursing immediately after a cesarean is a physical one. As the website for La Leche League points out, you will likely still have an IV in your arm, hospital equipment around you, as well as your incision to worry about — all of which can restrict your movements. The La Leche League site advises lying on your back to breastfeed within those first hours post C-section, with the help of pillows (and assistance from a doula, a nurse, or your partner). The site Healthy Children suggests a side-lying position with the baby facing you, or a "football hold" with a pillow over your belly to protect the incision site.

According to the American College of Obstetrics and Gynecologists (ACOG), cesarean births are associated with lower breastfeeding rates. A study published in the US National Library of Medicine (NLM) National Institute of Health (NIH) found that more women who had planned C-sections had no plan to breastfeed, or to even try, than women with vaginal deliveries. It also found that women who underwent emergency C-sections had more problems with trying to breastfeed, and used more resources both inside and outside of the hospital, than women who had vaginal births. (This may be due to the fact that after an unplanned surgery, many exhausted moms were, in the past, often encouraged by doctors to rest and regain their energy before attempting to breastfeed.) The conclusion of the study was that for women planning C-sections, more "anticipatory guidance" could be helpful in breastfeeding success. And for those women who underwent emergency C-sections, supportive care within the first four hours post birth and throughout the postpartum period would be helpful

In response to the aforementioned study, obstetric care providers are now being encouraged by reproductive and women's health experts to provide extra support for women who have undergone cesareans in their efforts to breastfeed. In their revised recommendations to health practitioners, ACOG urges health practitioners to encourage skin-to-skin contact for women who have had C-sections, noting that this method is also associated with a reduced need for formula supplementation. According to What to Expect, more hospitals are allowing skin-to-skin contact right after surgery, and some hospitals are even starting to let patients breastfeed right in the operating room.

Do not be dissuaded from breastfeeding just because you had a C-section. You are just as likely to be successful in your breastfeeding journey (should you choose to embark on one) as if you had delivered vaginally. The method of how you brought your baby into this world has no bearing on whether you can breastfeed, and fortunately, many health practitioners are providing more support and encouragement to C-section moms in their breastfeeding efforts than ever before.

More Like This
Can You Breastfeed After A Breast Lift? Experts Explain
Here's How To Keep Your C-Section Incision Dry
There’s A Reason Your Baby Always Falls Asleep While Breastfeeding
Are You Leaking Amniotic Fluid Or Is It Normal Discharge? Experts Explain