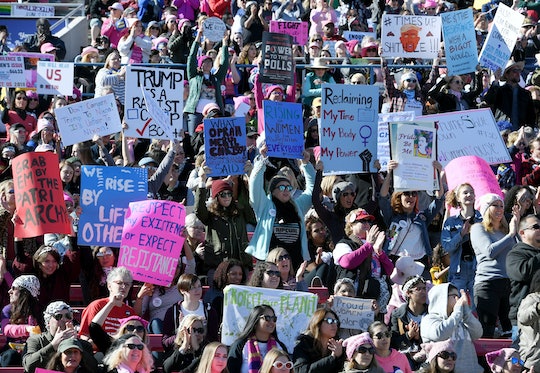 If You're Bringing Your Baby To The Women's March, Here's How To Handle Bottles

The 2019 Women's March is quickly approaching, with this Saturday, Jan. 19 being the third annual march. It is a unifying gathering of women from all walks of life coming together to decry hatred, bigotry, racism, and sexism, while elevating those who have been previously forgotten by our systems of government and society. It's a beautiful moment in time, and it makes sense that you would want even the littlest in your family to feel that kinship energy. But the logistics can be daunting, like what is allowed on the march? Can you bring baby bottles to the march, or will you have to remain at home with your infant?

According to march officials, small backpacks and bags are allowed. They do not specify that you are only allowed one bag per person, so ostensibly you could carry one small cooler bag for your bottles, and another for diapering necessities. In addition to these bags, Union Station in Washington, D.C. has a wealth of lockers available for additional storage if you're planning on arriving at the march via mass transit, which is the preferred method for many. Also, along the route, most stores that surround the area will be difficult to get into and severely crowded, so take that into consideration if you're planning on buying backups that day.

There will be sister marches across the country from New York City to Los Angeles and each march will have their own rules, so check the rules for your march before you attend. Many of the smaller marches have much less stringent rules and more space than what is available at the larger marches in the biggest cities and D.C. In New York City, I will say that while you are able to bring baby bottles to the march, and I have seen many a baby at the marches, feeding your baby is a bit of a logistical nightmare. It's shoulder-to-shoulder crowded, and there isn't a bathroom to be had in most areas of the march.

You will need to have a plan, and hopefully a partner or friend attending with you and your infant if you plan on feeding them at any point during the march. While almost everyone at the march that I've come across has been wonderful and helpful, there's only so much space to give and so much room to maneuver. I have taken my young daughter to the march, and at age 5 it was a wonderful experience for her, but also a lot to deal with. After about two hours, she was well and truly over it, and navigating out of the herd of bodies and into the Rockefeller Square train station back to Brooklyn was very difficult.

Another logistical consideration is waste. You need to be able to carry your waste with you, and that includes dirty diapers and dirty bottles or liners. Yes, there are garbage cans, but we are in the midst of a government shutdown and services won't be where they are normally. On top of that, the amount of garbage normally in and around those receptacles during the marches and rallies tends to be extreme. That's why organizers suggest reusable water bottles and for participants to make use of the fountains along the route as it will decrease the refuse.

So can you bring baby bottles to the Women's March? Absolutely, but you need to be prepared for tight quarters, a lack of disposal and bathroom options, and a bit of claustrophobia. Honestly, it's absolutely worth it for the camaraderie and joy of the experience.