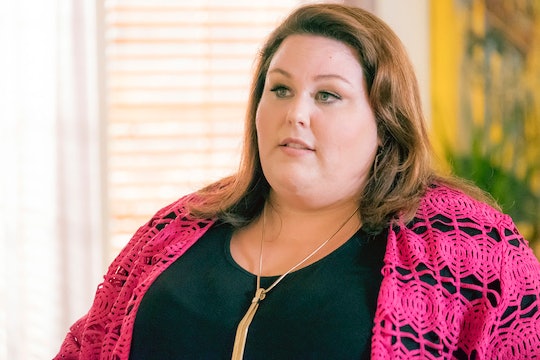 Kate Performed Her First Big Gig On 'This Is Us'

In the second episode of This Is Us Season 2, Kate had a minor breakthrough in her singing career. She didn't land an audition in the premiere, but when the house band at a bar needed a singer to fill in, Kate jumped at the opportunity. She performed beautifully, and viewers are definitely going to want to hear her cover of Fleetwood Mac's "Landslide" again and again. But can you buy Chrissy Metz's "Landslide" song from This Is Us? It wasn't available on iTunes before the episode aired, but it's sure to pop up ASAP, especially if fans show an interest in buying it.

If it's not made available immediately after the episode airs, then it might be included on any forthcoming soundtracks for the show. The first soundtrack from the show did feature Mandy Moore's performance of "Willin'" so they're not opposed to including their leading ladies' music. Licensing could hold things up for a little while, but Metz's "Landslide" is sure to be out there eventually. If not on iTunes, there's a good chance it will appear on the show's official YouTube channel; you may not be able to purchase it there, but you can listen to your heart's content.

"A Manny-Splendored Thing" explored the difficult relationship Kate has always had with her mother Rebecca. Though they shared a passion for singing, that actually ended up pushing them farther apart rather than bringing them closer together. Kate felt Rebecca was overly critical of her to the point of draining all the fun from singing, with a young Kate even telling her dad that Rebecca could make performing feel like a job. That criticism continued into Kate's adulthood, when Rebecca showed up to Kate's first big gig and immediately started to backseat sing from the audience by gesturing for Kate to tone it down.

Rebecca, however, didn't even see that what she was doing was stressing Kate out. Rebecca felt she was being helpful because she had been there before and she had more experience, but she was oblivious to how upsetting her nudging really was. Rebecca had never been able to make her singing dreams come true so she wanted even more desperately for Kate to succeed; the weight of those expectations proved to be crushing.

On top of all of that, Kate couldn't help but compare herself to her mom and feel that she came up wanting in every way. Instead of reaching a new level of understanding because they had the same dream, Kate and Rebecca were pushed into an unwilling competition because of their love for music. That came to a head during Kate's gig, where she performed "Landslide" while visibly uncomfortable with her mom's presence in the audience. What should have been an exciting moment for Kate became a tense one because she couldn't relax with Rebecca there.

"Landslide" was a good choice to illustrate all of the various complex issues threaded throughout the episode. The song's lyrics deal with change and the passage of time, two concepts integral to This Is Us, and the two things Kate and Rebecca need to finally heal.

The gig led to Kate finally expressing how she really felt and hurting Rebecca deeply in the process. But however painful it was to hear that Kate had felt inadequate all her life because of her mom, it was necessary to get that out in the open. If Kate had kept it to herself, then those issues would have just continued to fester. Now there is hope that Kate and Rebecca can finally begin to work through all the obstacles that have prevented them from being close.