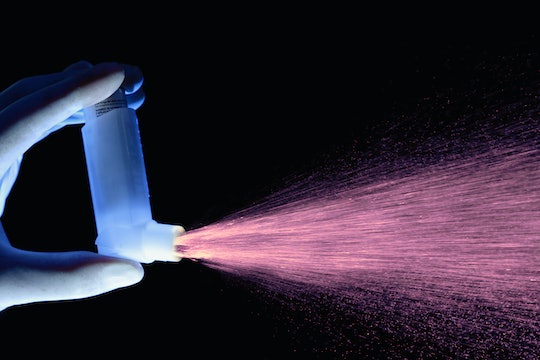 Can You Buy Asthma Inhalers Over The Counter?

Last week, drug giant GlaxoSmithKline voluntarily recalled nearly 600,000 albuterol inhalers due to a possible problem with the Ventolin HFA 200D delivery system. While patients aren't being asked to return the product, the affected inhalers may not deliver as many puffs of medicine as they're supposed to. If your Ventolin HFA 200D was affected, but you can't head to the doctor for a new prescription stat, you may be wondering if you can buy inhalers over-the-counter.

As it turns out, you can buy inhalers over the counter at the pharmacy — but that doesn't necessarily mean that doing so is a good (or very safe) idea, especially if you or your child is meant to be using an albuterol inhaler. The only OTC asthma medications that have made it to pharmacies in the country generally rely on epinephrine (also known as adrenaline) and ephedrine to relax airway muscles.

Both epinephrine and and ephedrine get the job done by stimulating all beta receptors, according to MedicineNet, while albuterol (the drug in Ventolin HFA 200D) targets a certain receptor more specifically. That specificity generally leads to both markedly better outcomes and fewer side effects, according to VeryWell, and experts don't recommend switching to an OTC inhaler like Asthmanefrin without consulting your doctor.

In fact, a pilot study conducted by University of Florida researchers found that not even a double dose of the active ingredient in Asthmanefrin compared to the effectiveness of a single dose of albuterol. "The problem is you are not treating the inflammation, you are just temporarily opening up the airways," Leslie Hendeles, the study's lead author, told University of Florida's College of Medicine Insider in 2014, when the study was published. "A patient could die from undertreatment."

However, Hendeles explained that there may be a reason to use OTC inhalers now and again, saying:

These products are good if you have mild intermittent asthma and run out of your prescribed medication or are traveling and you forgot your albuterol inhaler. There is a rationale for someone in those circumstances to access this. But it is important people don’t use this on a regular basis. These are only for occasional use for mild symptoms.

The Food and Drug Administration also issued a warning about using Asthmanefrin in 2013, warning users that it had received multiple complaints about "chest pain, nausea/vomiting, increased blood pressure, increased heart rate, and patients coughing up pink/red-colored sputum (hemoptysis)." (In fairness, asthma medication side effects can sometimes be a result of patients using the drug incorrectly.) Even the packaging for Asthmanefrin warns patients to speak to a doctor or pharmacists if they're taking prescription drugs for asthma (such as, you guessed it, albuterol).

If your albuterol inhaler was recalled and you're considering buying an over-the-counter inhaler in the meantime, do call your physician ahead of time and make sure it's safe for you to use. It may be totally fine for you to use an OTC inhaler for a small period of time — but that's something you'll want to figure out long before reaching for it.