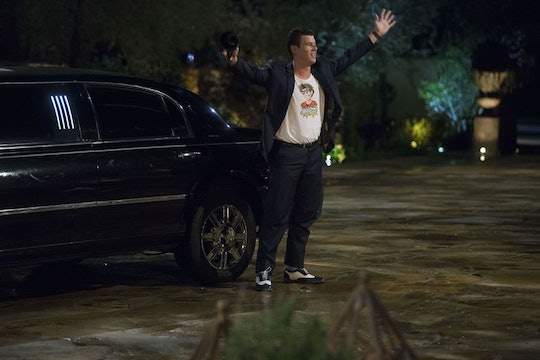 There's always at least one contestant every season that gets people talking. Mere minutes into the first episode of Rachel Lindsay's season of The Bachelorette, Lucas Yancey might have claimed that title, with his eccentric behavior and tendency to shout Whaboom in a manner befitting an actual cartoon character and definitely not a human man. Those who love Lucas' oddness and his signature catchphrase may be wondering: Can you buy Lucas' Whaboom shirt?

If it seemed like Lucas' appearance on The Bachelorette was a living sales pitch for whatever the heck Whaboom is, you're probably not too far off. After all, the guy showed up wearing a shirt (sleeveless, as it turned out!) with a cartoon version of his own sunglasses-wearing face and the catchphrase he'd by that point already shouted approximately 47 times. On the one hand, you've gotta appreciate the panache it takes to go all in with a persona like that (because there's no way that he's not putting on a persona akin to Corinne Olympios' obviously over-the-top early Bachelor Season 21 sexpot and naps behavior).

On the other hand, you kind of can't blame Blake E. for becoming quickly fed up with Lucas' seemingly endless Whabooms.

So, Lucas fans (if there's any of you other there by now), you'll be happy to know that the Bachelorette contestant does have a shop up and running on his personal website. The shirts are available in women's tees, men's tees, and unisex tank top styles. They also offer free shipping, in case you're into that sorta thing.

If you connected with your own inner-Whaboom on a spiritual level, you're in luck: Lucas posted a video on social media during the airing of the premiere, offering a free shirt to whoever can give him "their best Whaboom."

Despite the fact that Lucas' chyron describes his career, succinctly, as "Whaboom," he does seem to have an actual job, according to his site's about page. Unsurprisingly, California-based Lucas lists his profession as actor/writer/producer, which puts his Bachelorette behavior into a clearer context — he's fairly obviously there to become a TV personality in the long run. He's even got his own company called YknotWorld, which makes comedic films, short films, commercials, and other content. He also does stand-up and improv.

Perhaps surprisingly, Lucas lived to Whaboom in the mansion another day, when Rachel gave him the final rose of her season's very first rose ceremony, surprising many other of the remaining and departing contestants. If the confrontation between Blake E. and Lucas was any indication, he's sure to be the center of plenty of drama for however long he remains on the show.