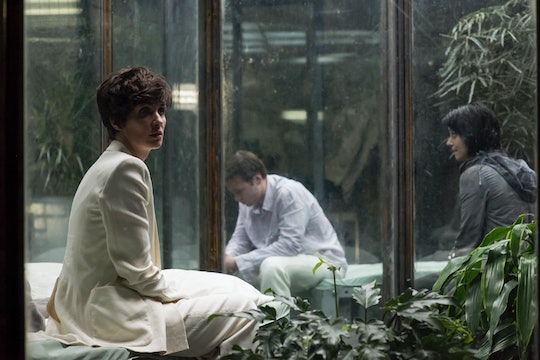 Can You Buy 'The OA' Score? The Music Is Just As Haunting As The Show

The OA is Netflix's latest mystery drama that deals with questions about the afterlife, other dimensions, and reality. The first season is only eight episodes, but within those episodes fans were left feeling haunted and wondering what was true and what was not. Along with the amazing acting capabilities of Jason Isaacs and Brit Marling — the latter of which also co-wrote the series with Zal Batmanglij — the show also had a score that went perfectly with the dark and mysterious feel of the series. It's for that reason that I'm sure many fans are wondering if you can buy The OA score. Unfortunately, however, it's not available for sale — at least, not yet anyway.

If you haven't seen or heard about The OA yet, the show follows the story of Prairie Johnson, a woman in her 20s who went missing seven years ago only to suddenly return home now with her eyesight in tact. Prairie gathers a group of five strangers to help her find the man she loves, Homer, and through flashbacks she tells the story of her life and what happened to her while she was away.

In an interview with The New York Times, Marling revealed that one of her big inspirations for the show was the song "Wood" by Rostam Batmanglij, who is Zal's brother and a former member of the band, Vampire Weekend. "This story touches a lot of dark places, but ultimately reaches for something very bright and expansive," Marling said. "Sometimes while I was working on the character in my imagination, I would listen to Rostam's song, and it would remind me of that dazzle."

It's not surprise then that Batmanglij, along with Danny Bensi and Saunder Jurriaans, composed the score for The OA.

For now, there doesn't seem to be any plan to release the score or the soundtrack for the show but with music this good it'd be surprising if they don't. Until then, fans can find a list of every song heard in each episode of the first season, and where they can be purchased if available on Tunefind. The music includes songs by Kyle Dixon & Michael Stein, Autolaser, Swedish House Mafia, New Radicals, Majical Cloudz, and many more.

All eight episodes of The OA are now available for streaming on Netflix. Trust me when I say, this is one show you won't want to miss out on.