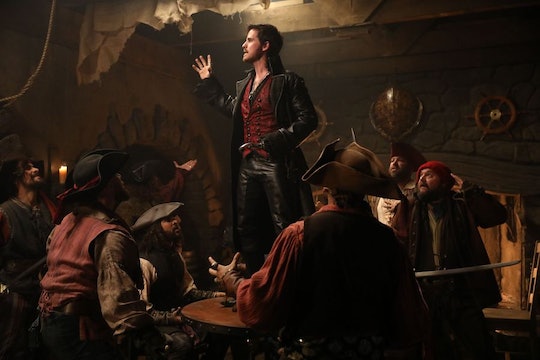 Fans Will Be Obsessed With These 'OUAT' Original Songs

The Once Upon a Time musical episode is almost here and based on the sneak peeks, it'll surely be a hit. The episode will include seven original songs recorded by the cast and fans should prepare themselves to have these songs get stuck in their head for quite some time. In fact, viewers will probably be so in love with the music, they'll find themselves asking if you can buy the Once Upon a Time musical soundtrack. Thankfully, you'll be able to find all the songs on iTunes. The score is now available for purchase in the form of the soundtrack aptly titled Once Upon a Time: Musical Episode.

Considering the music in the episode are all originals, it's not surprising that the show put together a soundtrack for fans to buy. Other shows that have included music have always made the songs available for fans to purchase either prior to or shortly after they debut. Popular shows like Smash and Glee, for example, followed this pattern, but more recently The Flash/Supergirl musical episode also made their songs available to buy.

If the Once Upon a Time musical songs weren't for sale, fans probably would've bought the episode just so they could listen to the songs over and over again. In an interview with Entertainment Weekly, OUAT executive producers Adam Horowitz and Edward Kitsis revealed the music is perfectly tailored for the characters that sing them. For example, Hook's song, "Revenge Is Gonna Be Mine," will be all about his pirate life and quest for revenge while Snow and Charming's duet "Powerful Magic" is about true love. Naturally.

The music also won't go unnoticed by the characters. The singing will be part of the storyline of the show. In flashbacks, it's revealed that Snow and Charming made a wish for their unborn daughter to be safe and protected. However, that wish led to the whole kingdom bursting into song, which of course ends up infuriating the Evil Queen — though her anger won't prevent her from being pulled into the singing as well.

Pretty much every character on the show will have a singing part, including Zelena, Henry, Granny, Grumpy, Geppetto, as well as many others. However, when it came to the question of whether or not Rumple would sing, Horowitz and Kitsis played coy. Despite their non-answer, it seems very likely Rumple will sing a tune or two, since Robert Carlyle, who plays him, definitely has serious vocal talents.

Fans can see all the musical numbers when Once Upon a Time airs on Sunday, May 7 at 8 p.m. ET on ABC.