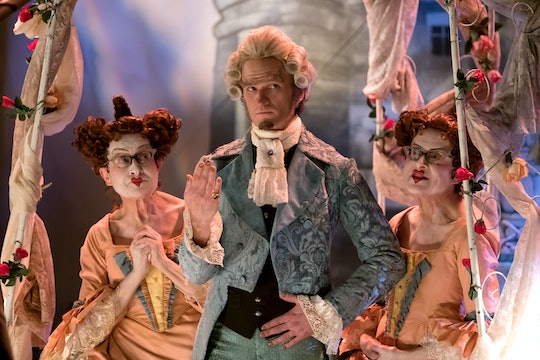 'ASOUE' Has Some Seriously Fortunate Songs

The show begins with the musical theme song, "Look Away," which is sung by Neil Patrick Harris, who plays the role of Count Olaf. With each episode, the theme song changes slightly to give a little insight on what has already happened to the Baudelaire children and what the viewer can expect to happen in the new episode. Throughout the rest of the series' first season, there are only two other notable songs besides the ever changing opening number.

The first song is "It's the Count," which Count Olaf and his rag tag group of "actors" performed together for the Baudelaire children, who were less than impressed. The second song came at the very end of the first season as the closing number. The song, which I'll refer to as "No Happy Endings," is melancholy and gloomily and while it probably won't be one you want to listen to over and over again, it is a bit catchy and brings hope that there's still plenty of story to come. (Looking at you, Season 2!) The final number includes almost everyone in the cast, beginning with narrator Lemony Snicket, followed by Violet and Klaus, Count Olaf, and Mr. Poe.

A soundtrack would be perfect for this series, even if it just included the different versions of the opening number. They're all so well done and Harris' voice is one I could listen to all day long, if I'm being honest. The rest of cast also have nice voices and the songs sound great, even if they are slightly depressing. But that's kind of the theme of the show, so it's pretty fitting.

It would be an unfortunate event (see what I did there?) if Netflix doesn't release a soundtrack for the new series or at least have the singles available on iTunes separately. I'd love to listen to some of these songs again (and again) and would definitely purchase them.

You can hear all of these songs in A Series of Unfortunate Events, which is now streaming on Netflix. Despite what the intro song warns, you won't want to look away.