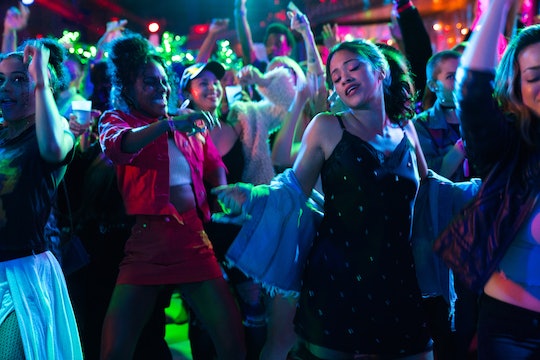 You May Find Yourself Dancing Along To The 'Someone Great' Soundtrack

There are a lot of reasons to love the Netflix original movie Someone Great. The cast is incredible (from Gina Rodriguez to LaKeith Stanfield to DeWanda Wise, you really can't lose). It's about female friendship and major relationship changes. And it also has an impressive soundtrack. But can you buy the Someone Great soundtrack, so you can continue to enjoy the music even after the movie's over?

Alas, you cannot. An official soundtrack has not been made available for purchase on either Amazon or iTunes. But all is not lost! In fact, there might be an even better solution available. Luckily the official soundtrack, with all 29 tunes, is available on Spotify. Can I get a happy dance?

Furthermore, a kind soul going by the username wokbeatz compiled an unofficial soundtrack on Spotify, basically rescuing every fan of the movie who was desperate for its tunes. It's an exhaustive playlist too, with 47 songs included in total. Basically, if there was even a hint of a song you liked in the movie, you can probably find it here.

You might run into a hiccup if you're not a Spotify user, however (there are dozens of us!). In that case, you could always take advantage of a free trial to indulge your Someone Great soundtrack needs. Or you can refer to the song list (either on Spotify or helpful sites like TuneFind) to pick out the ones you like the best and purchase them individually. It's a little more work, but it's an option.

Music is important to Someone Great both in-universe and out. Protagonist Jenny is a music journalist who just landed a job at Rolling Stone, which pretty much changes the course of her life. It provides the catalyst for her long-term relationship to end, and also inspires a last night of adventures with the two best friends who have stood by her for years. Music is an integral part of who Jenny is, so that had to be reflected in the movie's soundtrack.

That was writer-director Jennifer Kaytin Robinson's plan all along, too. She spoke to Entertainment Weekly about the music used in the movie and how much she loved being able to share "[her] own little mixtape" with viewers. The soundtrack was so specific that certain songs were even written right into the script, though generally music is chosen later on in the production process. "Supercut" by Lorde was a song she wanted to use from the very beginning, but it was Mitski's "Your Best American Girl" that was her favorite marriage of music and action. She said the scene that song accompanied just ripped her heart out.

While some songs in the movie are emotional gut-punches, others are just good fun. Someone Great made Robinson start dancing every time she watched it, thanks to music from Lizzo and Jessie Reyez, among others. The soundtrack is specific to Jenny and the world she lives in, but it's also deeply connected to Robinson. "So much of Someone Great is me pulling from all the things that I love," she told EW. That very much extended to the music.

Thanks to the magic of Spotify, you never have to go without the Someone Great soundtrack. It's about to turn your morning commute into an emotional rollercoaster.

Editor's note: an earlier version of this post did not link to the official soundtrack on Spotify.

More Like This
The Best Movies Airing On Freeform’s 31 Nights Of Halloween In 2022
All The Nights Hocus Pocus Airs On TV In October 2022
You Can Stay At A ‘Hocus Pocus’ House On Airbnb — And It’s In Salem!
Leonardo DiCaprio Nearly Had A Role In 'Hocus Pocus' & More Fun Facts You Didn't Know