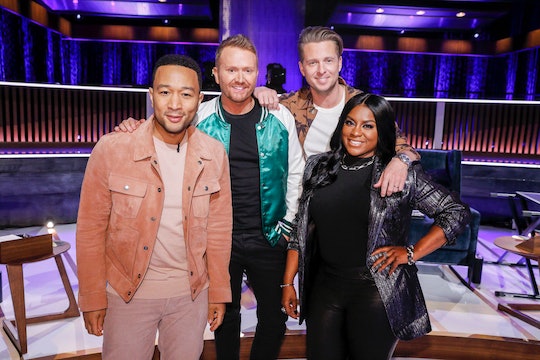 Your Music Library Is About To Get A Big Boost

With NBC's new reality competition series, Songland, viewers are essentially going to see a song's journey from live demo to a radio hit crafted for a specific artist. I know you have a lot of questions, and one of the first probably is: can you buy the songs on Songland?

The answer is yes, of course you can! Reality music competition shows have been partnering with iTunes and other music stores and streaming services since about 2008 to make songs available to anyone who wants a listen. Quite frankly, if Songland didn't offer this, they'd be missing out on a lot of money, and no one wants that.

Artists like John Legend, The Jonas Brothers, and Meghan Trainor will be trying to find a hit song for themselves each week. They will hear five songs and then choose three songwriters to work with songwriter/producer Shane McAnally and others to help them transform their songs into potential singles. The artist will then pick one of those songs to record and release. According to Rolling Stone, "alongside the song chosen and recorded by [the artist], writers will release versions of their songs for streaming and download after each episode." So, there will be at least two songs available for purchase. Pretty cool, right?

Personally, I love learning about the work that goes into any and all creative processes — whether someone is designing a dress or writing a song. So, I can't wait to watch — especially because McAnally told Rolling Stone that the process for writing the songs on Songland evolved quite a bit. It seems like a competition show on the surface — and it is. But there's more to it than that.

“There is an element of competition, but what sort of evolved as we were doing it — because we had collaborated so much — we realized that we really were there to just find the best song for the artist," McAnally said. “And it wasn’t about who ‘won’ because there are so many different opportunities for these songs once they get rewritten and rerecorded, even if it’s not right for John Legend," he continued, referring to the show's first episode which will feature Legend.

Before you start watching the show, you might be curious what the formula for making a "hit song" is. Well, McAnally has plenty of hit songwriting credits — including Kacey Musgraves' "Follow Your Arrow" and Miranda Lambert's "Mama's Broken Heart" — to name a few. But he says that for him, there is no one songwriting method. He relies on a connection to melodies and lyrics in his own writing and that's what he used when mentoring, too.

“For me to get connected to it, I have to find myself in it,” he told Rolling Stone. “I just wanted to go there. I didn’t really hear a song that I just was like, ‘I cannot find one piece of that song that I don’t relate to.'” It sounds like fans of the featured artists (and just music in general) are in for a lot of ear candy on Songland every week. I can't wait to watch and decide which songs I want to buy.