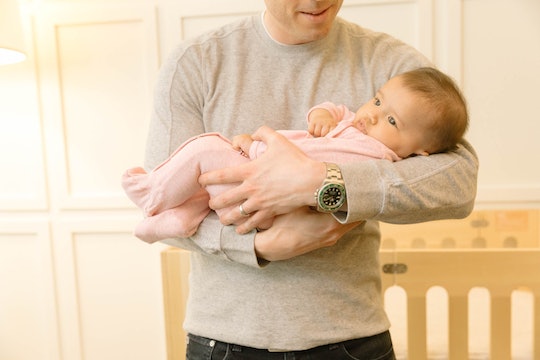 Here's How Your Baby's Late Birthday Impacts Your Taxes

Tax season. Two dreadful words that are outweighed by few others. I mean, all of the rules and numbers are enough to make even a math teacher cringe. Adulting, right? But no matter how hard you try to escape taxes (surely you've heard that they've been likened to death), April rolls around, and the sound of filing statuses and W-2s starts knocking at your door. But what if you had a child within the current filing year? There are benefits, but we're talking about the IRS. Can you claim a baby born late in the year as a dependent?

"One can claim as a dependent a child born in any part of the year assuming you provided more than 50 percent of their support," Robert S. Herbst, a New York-based attorney and founder of REL Advisors, tells Romper in an email interview. "We joke that for New Year's babies, those born on New Year's Eve are the most cost effective as one can claim them as a dependent for the full year and expenses are at a minimum."

Of course, Herbst explains, by the same token, while a baby born on Jan. 1 welcomes the New Year, one has to pay support for a whole year to get the dependent benefit.

Nate Masterson, the finance manager for Maple Holistics, points out that all you will need to claim your child as a dependent is their social security number. (So, go ahead and fill that form out at the hospital at the same time you file for your child's birth certificate.) "Once you have that, you can claim all of the deductible benefits of having a child," he says. "These include the child tax credit, the child care tax credit, and earned income tax credit."

And according to The Nest, eligibility for each of those credits is determined based on your filing status, number of children, and income. "The eligibility requirements are different for each tax credit and are adjusted from year to year," the website noted. You can find current information and figures on the IRS website.

Masterson says that while the IRS normally requires a child must be a resident of your home for at least half of the year to qualify as a dependent, that rule is waived for children born during the year.

In terms of deductions, consider also that while having a child won't affect your filing status if you're married, it could if you're single. That's because you might qualify as a head of household (HOH), therefore increasing your deduction. Curious if you're considered the HOH of your domain? As long as you're unmarried and paid more than half of the cost of maintaining the household for the year, then you can count on a bigger standard deduction, according to H&R Block.

Be sure to also keep in mind that adoption qualifies for claiming your child as a dependent, too — your kid is your kid. As a matter of fact, you might qualify for an adoption tax credit. According to the IRS, "tax benefits for adoption include both a tax credit for qualified adoption expenses paid to adopt an eligible child and an exclusion from income for employer-provided adoption assistance."

Put simply, the credit and the exclusion are meant to cover things like reasonable and necessary adoption fees, court costs, traveling expenses, and other expenses related to the legal adoption of a child. For 2017, the maximum tax credit is $13,570 per child.

Hey, no one said tax season was fun or uncomplicated, but at least you'll now have the know-how to get it done right.

More Like This
Why Is My Discharge Brown? Experts Explain
Here's Why Your Vagina Burns After Sex
Celebrate Your Baby’s 1st Valentine’s Day With These Instagram Captions
The Best Travel Tips For Solo Parenting
What Parents Are Talking About — Delivered Straight To Your Inbox