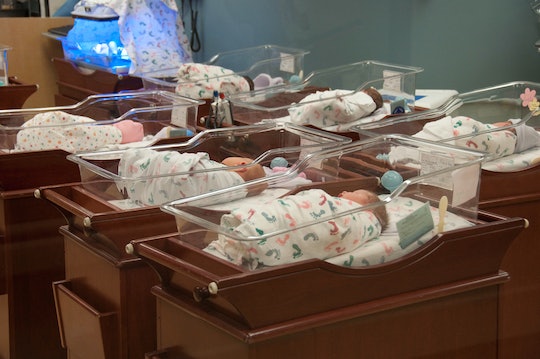 Can You Claim A Baby Name? The Real Deal On Baby Naming Etiquette

A name is something every parent gives their child within days of birth, and a piece of that child’s identity that is carried with them throughout life. With that responsibility, it’s no surprise how much thought parents put into choosing a name for their child. In fact, I know many people who start making mental lists of potential baby names long before they are expecting a child. But when people start to share their name ideas and preferences with others, emotions can run high. Baby naming etiquette may not be on the radar of expecting parents, but following a few simple standards can help keep the peace when friends and family members stake claim to the same name.

I’ve seen it happen. Two pregnant friends are having lunch and start rattling off names they are considering for their child-to-be. They both nearly choke on their french fries when they discover they both want to name their son Carter. Then the claws come out. A bidding war ensues with one mom claiming Carter is a family name, as the other one swears it’s the only name she ever wanted since was 12-years-old. The tension from choosing the same name could easily break the strongest of bonds.

But naming your baby doesn’t have to result in hurt feelings and burnt bridges. In this situation, a little consideration and understanding will go a long way. As far as baby name etiquette is concerned, there are two major point to keep in mind.

While some may choose to keep their baby name a secret, others start throwing down name claim like pioneers putting steaks in the ground of uncharted land. This process may begin well before this person is expecting a child. Once they have a friend or family member who is pregnant, they may say something like, “Congratulations, but I just wanted to let you know I’m planning on using the names Grace, Henry and Collette, so those are off limits. K?”

Once they’ve put it out into the world, people may think that they have secured rights to this name. But as the website Baby Names points out, telling people you want to use a specific name will not stop them from giving their baby the same name. It’s better for everyone involved — parents and children — if all can agree that sharing a name is not the end of the world (or the end of friendships and family ties.) In fact, sharing a name may bond those children together in special way.

On a similar note, an article on Babble points out that someone who calls dibs on a name should be respectful of other people who choose the same name. Holding a grudge and breaking off friendships doesn’t seem to make sense when it comes to a name.

When it comes to names, no one has a copyright or certificate of ownership. However, this is a task parents take seriously, and once you have given your baby a name, it sure can feel like you rightfully own it.

Let’s consider this scenario: you already have child and someone you know uses the same name for their baby born after your child. You may feel as if they stole all the love and work that you put into choosing that particular name. Territorial instincts are common when someone uses a name you have already assigned to your child. But let’s turn the tables and say you have your heart set on the same baby name as your best friend’s one-year-old daughter. Is there a way for you both to have children with the same name without things getting weird?

In her etiquette column for Real Simple, Catherine Newman suggested letting someone know that you would like to use the same baby in a direct and positive way. Even though you don’t need their permission (after all, it’s your daughter and you can name her as you please), approaching the conversation in a respectful way is the appropriate thing to do. You may be surprised at the results a polite gesture like this will yield.

Expectant parents have enough concerns surround the arrival of their new bundle of love, getting caught up in a name war doesn’t have to be one. After it’s all said and done, no name will outshine the love and joy a new baby brings into the world.