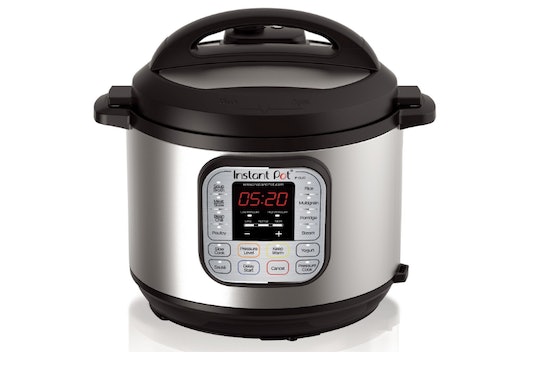 If you haven't heard the words "Instant Pot" in the last several months, then have you really been living? Dramatic, I know, but the truth is the Instant Pot is kind of the cool kid on the kitchen appliances block right now. While the Crock-Pot was certainly the "it" gadget of the 1970s, the Instant Pot packs the best of both worlds. Like the slow cooker, cooking dinner is relatively hands-free, but it also cooks fast. But if you decide to take the plunge and swap out appliances, can you convert Crock-Pot recipes to Instant Pot?

The short answer is, yes, you can. The longer answer is that while you can adapt slow cooker recipes for the Instant Pot, you'll have to make a few adjustments to do so.

For example, "Instant Pots need more liquid to function properly, so if your recipe doesn't already call for at least a cup of liquid (such as broth or water), add it," MSN noted. You'll also want to wait to add certain ingredients, like dairy or thickeners, until the end. Simply whisk them in when the dish has finished cooking.

Tiffany at Don't Waste The Crumbs also recommended you let ingredients like tomato paste sit atop food (i.e. don't mix it in), cook as directed, and then mix it in at the end.

When converting Crock-Pot recipes for the Instant Pot, you might also need to adjust cook times. For instance, Super Healthy Kids said that if a Crock-Pot recipe calls for eight hours on low (or four hours on high), it will be done in about 25 minutes in the Instant Pot. If it isn't quite done, then you can just cook it for an additional five minutes on manual, or until cooked through.

According to Don't Waste The Crumbs, unlike the Crock-Pot, you'll also need to separate vegetables from meat. That's because if you cook them together in the Instant Pot, then you'll end up with mushy veggies. Remedy this by putting the meat into the Instant Pot and setting for the desired cook time, but reduce the cook time by 10 minutes. When the timer goes off, release the steam and then add the vegetables, cooking for the remaining 10 minutes.

Many slow cooker recipes have you put the vegetables in with the meat at the very beginning, and they all cook together. If you do this with the Instant Pot, you’ll end up with mushy vegetables.

"If you’re starting with smaller cuts of meat, like a stew or soup (say no more than 1” chunks), you shouldn’t run into the problem of mushy vegetables," wrote Tiffany at Don't Waste The Crumbs. "You can add everything at the same time, at the beginning."

Of course, it you're like me and have decided to stick with your trusty Crock-Pot, then know that you aren't alone. I am dedicated to my slow cooker and, honestly, I don't care to learn how to operate a new appliance. Other slow cooker devotees, however, say that, while they were skeptical, they were surprised by their ability to fall in love with the Instant Cooker.

"To be totally honest, I initially thought the Instant Pot seemed way too good to be true, so I was prepared for it to malfunction (or stop working altogether)," Kelli Foster noted over at The Kitchn. "It was only a matter of time, right? Except that it wasn't."

No matter which appliance you choose, the truth is they both make cooking easier, which is a total win at the end of a long work day or when you roll in the door after shuffling kids between extracurriculars. The next best thing, of course, is getting someone to do it for you.