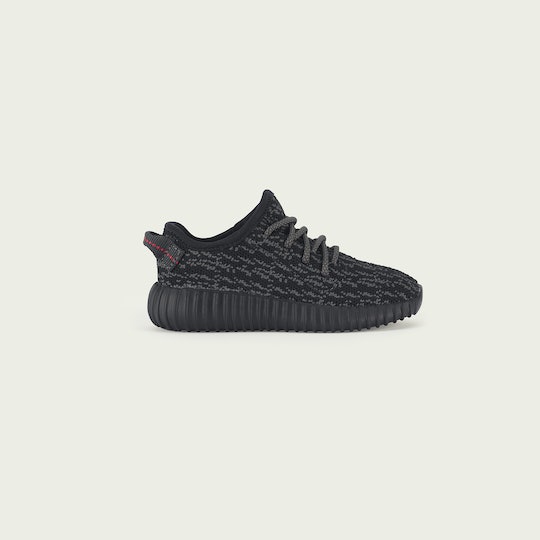 Can You Customize Baby Yeezys? Yes, But They Won't Be Kanye's Official Version

On this weekend's episode of Keeping Up With The Kardashian's, it was revealed that baby-sized versions of Kanye's famous sneakers, Yeezys, were on the way. Kim K had already posted Snapchats of Saint West wearing a pair of mini-Yeezys, so the buzz has been building for a while. When they were released this weekend they almost immediately sold out. Of course, the next question is — can you customize baby Yeezys? The short answer is: yes, sort-of. If you don't mind counterfeits or doing some digging on Etsy.

When Kanye launched his line of grown-up footwear back in February, they sold out almost immediately. The black Yeezy 350 Boosts went on sale online from Adidas Feb. 19 and seemed to sell out in seconds. A reporter from TIME tried to snag a pair but waited more than 20 minutes on the site, where he got a message from the site saying that there were still Yeezys available, and that people who were waiting were being "randomly allowed" to access the product page. They originally retailed for $350, but now that demand is exceeding supply, the resale price is going through the roof.

On Amazon, men's Yeezy Boosts from Adidas are going for between $1,200 to $3,800. And on eBay? You can score a pair for around for a few hundred to a few thousand dollars, but buyer beware: they might be knock-offs.

Baby Yeezys, however, cost a lot less than the grown-up version: a pair of these tiny sneaks will only set you back $130. They're an exact mini-replica of the originals and will come in Pirate Black and Turtle Dove. A press release from Adidas read, “Finally, infants and toddlers will be able to coordinate Yeezy looks with their style-forward parents." Had the baby version of Kanye's originals not sold out just as fast, that would still be true.

The baby-sized sneakers also only come in two colors — black and gray — so many people are wondering if they'll ever be able to get Yeezys in a different color. If they can get a pair at all, that is.

A little digging through shops like Etsy reveals that while you might not be able to get official customized — or just regular — Yeezys just yet, you can definitely get some pretty good dupes from a few creative Etsy shops.

A shop called BABYCROCHETfashion offers adorable crocheted versions of the sneakers, in their original black or gray color. And seller Yunisiya will crochet you some Yeezy-inspired booties that have a few other options, too.

But the shop that seems to be taking the cake on making baby Yeezys, BellaBabyMiami, is taking the game a step further by actually hand-crafting Yeezy-inspired baby shoes. The shop started making them months ago and you can get a pair on Etsy for just $60. Pre-order them here.

They also make baby-sized Louboutins — so, maybe grab a pair of those to tide you over until the Yeezys are back in stock.