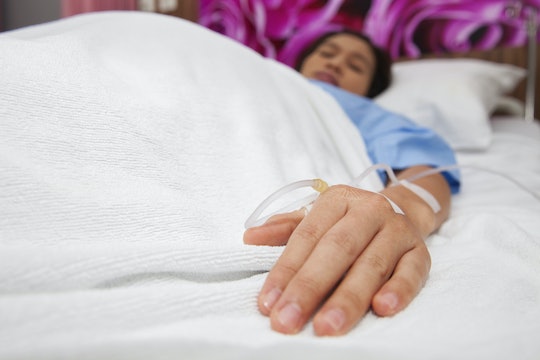 Can You Deliver A Breech Baby Without An Epidural?

There is a lot of stigma surrounding both the topics of breech babies and epidurals. Combine the two and you've got an equation for confusion. When pregnant mothers are told their baby is breech, the first emotion they experience is fear, ranging from a fear of their baby's health to that of the future delivery. And, because of that fear, it's also normal to wonder (assuming your baby doesn't turn around before birth) whether or not you can deliver a breech baby without an epidural. As with most things in pregnancy, breech deliveries should be taken on a case by case basis.

According to NCT, a parenting resource based in the UK, breech births shouldn't be any more or less painful than a regular headfirst birth. If your baby is in the "frank breech" position (when baby's legs are straight up or by their ears) or the "complete breech" position (when their legs are crossed higher than their bottom) a vaginal birth is likely to go more smoothly, NCT noted.

In America, the C-section rate is about 34 percent, according to Fit Pregnancy, and the majority of doctors opt to deliver breech babies via C-section. After the infamous Hannah Term Breech Trial (the major study that skyrocketed C-section rates) was proven to be flawed, doctors have been slowly opening up to the idea of delivering breech babies naturally.

Most doctors will try and turn the baby before you are full term, but if your baby still doesn't turn, it doesn't rule out the option for an unmedicated breech birth, according to an article from the Wall Street Journal. As far as epidurals are concerned, its best to discuss your options with your healthcare provider before opting either way. While some say the pain is no worse than with a straightforward, unmedicated vaginal birth, some moms prefer pain medication. As with any birth, things should be taken on a case by case basis according to what makes you feel as confident as possible and keeps your baby as safe as possible.