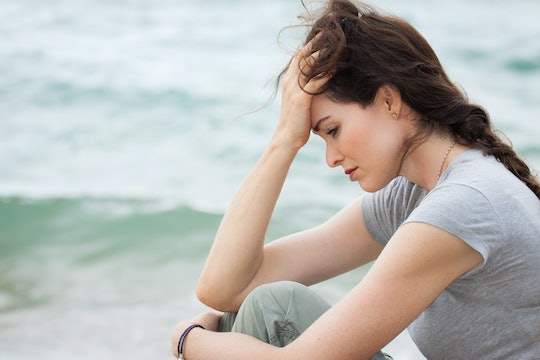 Can You Develop PPD Months After You Give Birth?

Whenever I thought about postpartum depression (PPD) during my pregnancy, I always imagined the sad-looking woman in the medical pamphlets. You know, the pretty lady staring out a rain-streaked window, looking thoughtful and a little blue. In fact, postpartum affective disorders encompass an incredible range of emotions and behaviors, and though the photogenically unhappy woman in all the posters raises awareness, she barely scratches the surface in terms of capturing women's real experiences. So what does PPD really look like? Can you develop postpartum depression months after baby is born? How long after giving birth must you continue to be watchful?

Romper spoke with Karen Kleiman, MSW, Founder and Director of The Postpartum Stress Center, and author of several books on postpartum depression and anxiety, including Therapy and the Postpartum Woman. According to Kleiman, symptoms of PPD can rear their ugly heads any time during the first year after you give birth. However, as Kleiman writes in an email interview, some women suffer through mild to moderate symptoms for quite a while before reaching out to their healthcare provider, hoping the issue will resolve on its own. As a result, in some cases PPD might not be diagnosed until a year (or even two) later.

Women are under a lot of pressure to be perfect, and that pressure reaches a boiling point the moment they become mothers. Kleiman explains,

"Postpartum women are notoriously good at looking good. They often go to extreme lengths to make sure that others see them as in control and feeling good so that they are not judged as being 'bad moms' ... Because of this tendency toward perfectionism ... women who are really suffering often fall through the cracks of the medical community."

Hippocrates first documented postpartum emotional disturbances around 700 BC, and PPD was widely publicized by doctors and celebrities alike in the '80s and '90s. And yet, as Kleiman puts it, "stigma is alive and well."

I don't know about you, but I find this lack of progress infuriating, not least because it puts women's health at risk. Kleiman notes that when women disguise their symptoms, they wind up feeling sick longer. "This is why many of us on the front line are pushing for more screening and more precise assessment protocols."

Personally, I wonder if PPD is especially slippery because it can be difficult to recognize within yourself. In my own case, I didn't feel depressed after my daughter was born, but I certainly experienced the tumultuous and confusing phenomenon known as the "baby blues." According to a 2002 article in the Journal of the American Medical Association (JAMA) by Laura J. Miller, MD, 50 percent of women report feeling the "postpartum blues," and some number of those will go on to develop true PPD.

In the weeks after my daughter was born, an incredible onslaught of emotions assaulted my body and mind. I experienced a cacophony of feelings, both good and bad.

My own advice? Tune into yourself, and expect the unexpected. Don't be surprised if after giving birth you feel not only sadness, but also rage, irritability, fear, panic, powerlessness, insomnia, agitation, and incredible joy — possibly all at once.

Also be on the look out for intrusive, frightening thoughts, which are more common than you might think. As Kleiman writes, "In addition to postpartum depression, we are hearing more and more about serious anxiety disorders that can emerge during the postpartum period."

For instance, obsessive compulsive disorder (OCD) is known to worsen after the birth of your baby, and while a new mom "might recognize that these thoughts are irrational (What if I accidentally drown my baby while I’m giving her a bath?), the anxiety ... can feel unendurable."

You don't have to endure intrusive thoughts, persistent sadness, or any other troubling emotion, for that matter. You don't have to solider through, and you certainly don't have to be supermom right off the bat. Don't be afraid to reach out to your healthcare provider, no matter how long it's been since you gave birth. Then tell them the truth, and tell them everything.

Professionals don't expect you to feel a certain way, or to look like the sad woman on the posters. In fact, you may look great. But if you're feeling miserable, you haven't solved the problem — only masked it. Don't let stigma or cultural expectations silence you, and don't let a treatable condition drag on for years — it's not worth it. The sooner you get treatment, the sooner you'll start to feel better.