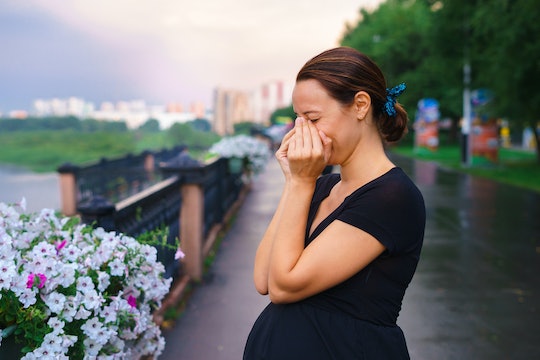 Can Drs. Diagnose PPD Before You Give Birth?

It's a common misconception that the signs of maternal depression only become apparent after a mother delivers her child. The fact is that many women have symptoms almost identical to those of postpartum depression (PPD) while they are still pregnant. But, is it possible for doctors to diagnose PPD before giving birth?

Technically, the answer is no.

Although the signs and symptoms are nearly identical to PPD, the American Pregnancy Association (APA) noted that depression in moms-to-be is considered prenatal depression, since the women are still in their prenatal stage. But, this doesn't mean that doctors can't use what they've learned about the correlation between prenatal depression and postpartum depression to predict the likelihood that a mom's depression will continue after child birth.

The New York Times wrote about a 2015 research study published in Lancet Psychiatry of more than 8,200 new mothers in seven countries. The researchers found that women with the severest depression symptoms – suicidal thoughts, panic, and frequent crying – began to exhibit these signs of depression prior to giving birth. According to the APA, the American Congress of Obstetricians and Gynecologists (ACOG) noted that anywhere from 14 to 23 percent of women struggle with prenatal depression.

Due to surging hormones, increased amounts of stress, anxiety, and societal pressure, What To Expect suggested that women are even more susceptible to depression when they’re pregnant and shortly there after than at any other time in their lives. With this information, doctors are better able to predict which mothers are at greatest risk for PPD and help them get early intervention.

There is still some stigma associated with depression and mental health. Pregnant moms may call the doctor to discuss a belly twitch, but may not mention thoughts of suicide at a prenatal appointment. This is where mandatory mental health screening can save lives.

According to Pediatrics, screening for mental health risk factors should be an integral part of routine prenatal care. Doctors can use this screening to become familiar with the patient's family support systems and other psychosocial factors such as poverty, mental health history, and history of substance use. The Journal of the American Medical Association's (JAMA) noted that risk factors for maternal depression can be found during a routine prenatal screening. These risk factors include poor self-esteem, child-care stress, prenatal anxiety, life stress, decreased social support, single/unpartnered relationship status, history of depression, difficult infant temperament, previous postpartum depression, lower socioeconomic status, and unintended pregnancy.

By having a full mental-health picture, your OB-GYN can refer you to a specialist where you can receive prenatal depression treatment which may lower your risk of developing PPD.