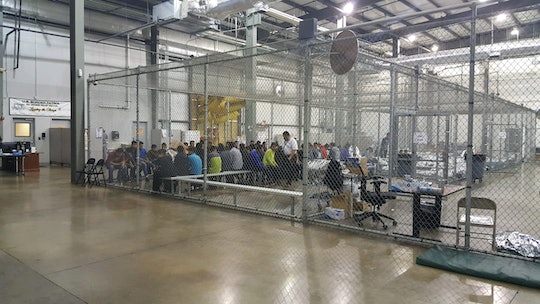 If You Want To Donate Items To Immigration Detention Centers, Here's How To Start

If you're a person on this planet, then you've seen the recent heartbreaking photos of immigrant families being separated at the border. There's a toddler girl, crying at her mother's feet as she is patted down by a U.S. border agent. Another young girl, Nicole Hernandez, clinging to her mother's leg as they wait to request political asylum. The reason? In May, the Trump administration announced its "zero tolerance" policy, one that federal officials say has led approximately 2,000 undocumented immigrant children into government custody. If you're like me, then you're wondering, "Can you donate to immigration detention centers?" The truth is, there are some important things you can do to help these families.

“The practice of separating families amounts to arbitrary and unlawful interference in family life, and is a serious violation of the rights of the child,” Ravina Shamdasani, a spokesperson for the U.N. human-rights office, told The Guardian. It's difficult because when big things like this feel overwhelming, it's easy to think, "But what can I do?" You are, after all, one person. But major organizations across the country have put steps in place to help you do the work, and that makes donating, volunteering, and just showing up that much easier.

For starters, there are a few organizations to which you'll want to consider donating your time, money, and/or supplies:

Many organizations in border states are also seeking volunteers who can help with "organizing legal intake and interviewing families, especially if those volunteers are Spanish-speaking and have legal experience," according to The Cut.

Also on your agenda? Calling your elected officials to express your disapproval with the current policies. If you're not sure who represents you, then you can easily find out by typing in your address at GovTrack.us. And if you don't know what to say when you do pick up the phone, then the ACLU has put together a script so you can hit all of the key points.

Yes, you are one person, but together — and with the help of these organizations — many people can incite radical and necessary change.

More Like This
12 Last-Minute Vacation Spots For Memorial Day
It's Not Just Covid: Doctors On Why Everyone's Getting Sick Right Now
Here’s What You Need To Know About That Viral 1960s Baby Formula “Recipe”
Lego’s Newest Set Imagines Vincent Van Gogh’s Starry Night In Brick Form