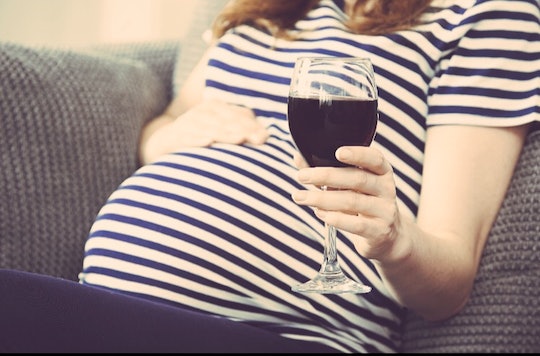 Can You Drink Red Wine When You're Pregnant? It's Time To Separate Fact From Fiction

Being pregnant usually means changing your daily routine. From exercise regimes to wardrobes, everything is subject to alteration. Staying up-to-date with these seemingly endless guidelines can feel overwhelming and restricting, too. Can you stay in your yoga class or continue running? Can you pick up your older child? Can have sex in your favorite position? Oh, and can you drink red wine when you're pregnant, or should you hold off until the baby is born? Thankfully, for every question there's usually an answer. It's just important that you separate fact and fiction before pouring a glass of vino.

While there have been conflicting messages sent and arguments made regarding alcohol consumption during pregnancy, the Center for Disease Control and Prevention (CDC) came out with new guidelines that suggest all women of child-bearing age avoid drinking any alcohol if they're sexually active and not on birth control. The CDC backs up their guideline by claiming a woman may not know she's pregnant and, if she imbibes, runs the risk of exposing the fetus to to a slew of alcohol-related complications.

The CDC then lists the risks associated with alcohol passing from a mother to a fetus through the umbilical cord, including a laundry list of medical issues such as physical, behavioral, and developmental disabilities, miscarriage, stillbirth, or any number of disorders listed under Fetal Alcohol Spectrum Disorder (FASD). Their message is strong and to the point: "no amount of alcohol is safe to consume during pregnancy."

In case the CDC's caution isn't convincing enough, the American Pregnancy Association (APA) backs up the claim, citing "no amount of alcohol has been deemed safe during pregnancy, and if at all possible, even casual drinking should be avoided." The American College of Obstetricians and Gynecologists and the American Academy of Pediatrics all note that no amount of wine during pregnancy is deemed safe, too, and again advise women that "consuming wine while pregnant should be avoided."

For the one-glass drinkers, this strict guideline might seem like a fear-mongering oversimplification, and both the APA and CDC reference a pregnant woman's common desire for the occasional nightcap — especially if an OB-GYN gives his or her patient the go-ahead. Still, all of the aforementioned associations and centers adamantly advise against it. According to the APA, alcohol passes through the placenta and into the baby's blood stream, which may cause immediate defects/abnormalities. Even if you don't think anything serious could come of it, the APA says there's too much risk involved in having even one glass of wine.

The confusion as to whether or not an alcoholic drink is OK during pregnancy may be the fault of previously written articles and guidelines that suggested moderate alcohol consumption is safe during pregnancy. Studies, such as this one featured in a 2013 edition of BMJ Open, claimed pregnant women who continue their normal drinking patterns may not put their unborn children at an additional risk. This may be why the APA and CDC rewrote the guidelines — to make the answer clear, straightforward, obvious, and easy to find.

So when it comes to growing a baby inside your body, it's probably better to stay clear of all alcohol, including red wine, until after delivery. If you're thinking "one glass couldn't hurt," perhaps, in this case, it'd be best to assume the worst case scenario and forgo the alcohol to be safe now, rather than sorry later. And, as always, consult with your OB-GYN or health care provider regarding your diet and nutrition.