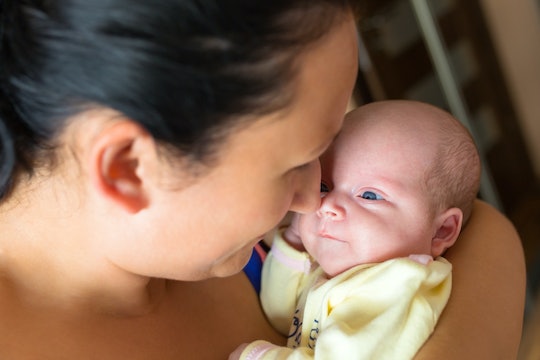 What Experts Want You To Know About That Celebratory, Post-Birth Cocktail

While popular culture would leave you to believe otherwise, not everyone likes to drink. Still, after 40 weeks (more or less) of sobriety, a cocktail might be in order. I mean, bringing another human being into the world is cause for celebration, right? A few celebratory libations shouldn't trump safety, though, so can you drink right after giving birth? Just like pregnancy, there are a few postpartum diet restrictions to consider, not only for your baby's benefit, but for your own.

Of course, prior to postpartum life a new mom probably hasn't had much by way of the alcoholic beverage. After all, drinking during pregnancy is generally advised against. The Center for Disease Control and Prevention (CDC) advises soon-to-be mothers not to drink at all during pregnancy, warning that it can cause serious complications for babies, saying:

"Alcohol use during pregnancy can cause fetal alcohol spectrum disorders (FASDs), which are physical, behavioral, and intellectual disabilities that last a lifetime."

Once you give birth, though, it's normal to want to toast to your newborn's arrival with a glass of wine or champagne. If you are planning on breastfeeding, however, you might need to hold off. In fact, The American Academy of Pediatrics (AAP) advises nursing mothers not to drink alcohol. They warn that consuming alcohol can lead to your baby taking in less breast milk, and the alcohol itself can alter the taste of your milk. The APA goes on to say, "Alcohol passes through your milk to your baby, so it's best to avoid habitual use while breastfeeding."

Catherine Herway, MD, and Assistant Director of Maternal Fetal Medicine at Staten Island University Hospital, told Health that more research needs to be conducted, however, to truly understand whether or not moderate drinking whilst nursing is safe or not for babies.

In fact, some researches have called for the so-called "alcohol ban" on nursing mothers to be lifted. Melinda Wenner Moyer, a science writer and parenting expert, studied all the research on alcohol and breastfeeding and concluded, in an article published on Slate, that drinking while you are nursing, in moderation, is safe.

But what about if you choose not to and/or are not able to breastfeed? Is it safe for you to enjoy alcohol in moderation directly after childbirth? In theory, you can begin drinking again immediately after giving labor and delivery. However, some researchers and medical professionals are concerned that some women may use alcohol to mask their symptoms of postpartum depression (PPD). In fact, The American Addiction Centers warns that there is a correlation between moms suffering from PPD and choosing to self-medicate with alcoholic beverages.

If you are not suffering from depression or anxiety, Babble says having a drink is one of the things you can look forward to after giving birth. In other words, in moderation, after consulting your doctor, and if you're feeling mentally well, it's probably fine to enjoy a drink after you've brought another human being in the world. Of course, consulting a doctor so you can make the best choice for yourself, and your newborn, is always the right thing to do.