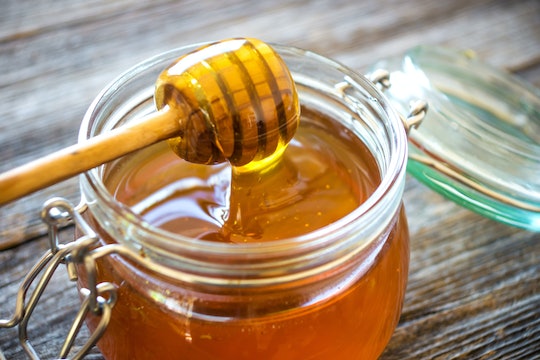 Here's What You Need To Know About Eating Honey During Pregnancy

My daughter just turned 1 year old, which means that for the first time in her life, she's allowed to enjoy the sweet, liquid gold that is honey. Before now, she was simply too young, and her risk of contracting potentially-lethal botulism from honey too great. But wait. If babies shouldn't eat honey, what about women with babies on board? Aren't they at risk of botulism, too? Can you eat honey during pregnancy, or not?

Here's the deal: an infant under 1 year of age can develop botulism after ingesting C. botulinum spores, present in soil and honey, according to an article in American Family Physician. In a baby's belly, those spores can then germinate into a toxic bacteria that wreaks havoc on the nervous system. Up to 25 percent of honey products may contain botulinum spores, which is why doctors warn parents to keep honey away from infants until after their first birthday, when the child's digestive system is developed enough to deal with possible spores. For the same reason, honey isn't dangerous for pregnant women, who are equally able to digest it, protecting themselves and their babies, according to the National Honey Board.

"Pregnant women are not at higher risk of botulism," explains Dr. Bradley Price, an OB-GYN in Austin, Texas, in an interview with Romper. "What protects women ... is that adults have higher levels of acid in their stomach and many more friendly bacteria in the gut that competes against those botulinum spores."

Price explains that unless a pregnant woman has a gastrointestinal disease, like colitis for which she takes medication, she's not at risk from that cup of honey-lemon tea. And that's great news for women everywhere — and not just because honey is a delicious natural sweetener. According to New Kids Center, honey improves immunity, soothe coughs and colds, and even combats insomnia (they recommend taking a bit of honey with milk in the evening for a relaxing bedtime drink). Of course, because honey is a source of sugar, it's important not to go overboard.

During pregnancy and beyond, Price advises patients to eat less sugar, less white flour, and less animal fat — instead, they should focus on whole grains, fiber, fruits and vegetables, and lean protein like skinless chicken and fish. It's also crucial to take a good prescription prenatal vitamin throughout your pregnancy, and even before, if possible.

Among its benefits, honey is a small source of iron, which is a particularly important mineral for pregnant women. According to SFGate, honey contains about as much iron in one tablespoon as a medium-sized carrot, which, while not a significant dietary amount, isn't bad for a sweetener. According to Price, many women begin their pregnancies already iron deficient, and that can be hazardous. Considering that blood volume increases enormously during pregnancy, it's hard to overstate the importance of ensuring you're getting enough iron to prevent anemia. And if you don't get enough absorbable iron, you'll increase your risk of needing a blood transfusion after childbirth, says Price.

Honey aside, the very best way to make sure you're getting sufficient iron each day is to take a prescription prenatal vitamin. Unfortunately, there's a push in the industry to provide more generic prenatal vitamins to women, which Price sees as a huge mistake. "It’s really apples and oranges when you go from generic to prescription," he explains. "There are lots of ingredients in prescription vitamins that just aren’t available in generics. For instance, they make the iron much better absorbed, and much better tolerated."

So check that your prenatal vitamin is prescription, and be sure to take it every day. In the meantime, don't feel you should avoid honey while pregnant. Your body knows how to digest it, and, in limited amounts, it's healthy, too.

More Like This
How To Increase Your Sex Drive While Pregnant
31 Sweet & Savory Apple Recipes To Make This Fall
These Oktoberfest Instagram Captions Will Get Likes & Prosts
Are Boy Babies Usually Late? Signs Your Baby May Be Born Late