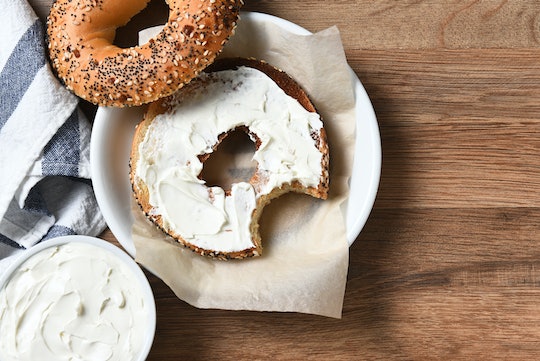 Here's The Actual Deal With Eating Poppy Seeds During Pregnancy

There’s a long list of dos and don’ts you’re expected to adhere to during pregnancy, and sometimes it can be hard to keep track of it all. You know you should avoid alcoholic drinks and smoking, but when it comes to foods, the lines can be blurry. Your doctor may warn you about the risks of eating unpasteurized cheese and cold deli meat, but eating poppy seeds while pregnant might also belong on the don’ts list. Yes, really.

Clinical pharmacist Bineesh Moyeed Pharm.D, says that there is not enough clear evidence or research to suggest that poppy seeds in any amount are safe to eat during pregnancy, so you may just want to avoid them altogether. “Even though the amount of poppy seeds in foods such as bagels and muffins is very small, I would still recommend pregnant mothers err on the side of caution and wait to eat them until after their baby is born.” She also suggests that you always consult your physician about any and all medications, drinks, and foods you eat during pregnancy.

You’ve been enjoying those little black seeds safely for so many years, so why should you avoid them when you’re pregnant? The concern over poppy seeds stems from the connection they have to opiates and heroin, explains Moyeed, and the fact that even in the smallest quantities, they can leave trace amounts of opiates or morphine in your system, especially if the seeds are contaminated. “In large amounts, opiates have been proven to be extremely harmful to a pregnancy and unborn baby,” she notes, “but the risks posed by negligible amounts are unknown.” So, just to be on the safe side, you may want to hold off on those poppy seed muffins for now.

Dr. Allison Herman, OB-GYN at University of Colorado Rocky Mountain OB-GYN, says eating poppy seeds is not a huge concern she has for her pregnant patients. Eating poppy seeds can sometimes cause a positive result for opiates on a drug test, she says. “That being said, that small amount of these chemicals in the mother’s bloodstream would not pose a risk to the fetus,” she says. “Think about it — you don’t get high from eating a lemon poppyseed muffin.”

Besides muffins, poppy seeds are used in a variety of dishes, including salad dressings, and their distinct taste and bluish-black color makes them a culinary favorite. But while the seeds only contain trace amounts of opiates, it is the actual sap from their flowers that is used to make harmful drugs like heroin. Poppy seeds are planted to bloom poppy flowers, explained PBS, and when the petals of the flowers wilt and fall, the round seed pod inside is exposed. Not only does the pod contain hundreds of poppy seeds, the website noted, it also contains crude opium in the form of a milky white sap. That sap is then scraped out and used and sold, and the seeds leftover are cleaned and then used for culinary purposes.

It’s when trace amounts of that crude opium sap are left on the poppy seeds that they can pose a risk. When you eat those contaminated poppy seeds, explained Britannica, trace amounts of opiates can even show up on a drug test, and it’s probably because of the morphine residue left on them. In fact, according to a report by WCPO Cincinnati, a Kentucky mother almost lost custody of her baby when she was given a prenatal drug test that came back positive. Claiming that she had not been on drugs, the new mother sued the hospital, the report noted, and explained that she had just eaten bagel chips topped with poppy seeds as a snack before going into labor, which made her test positive for opiates.

But while a few seeds may not be enough to cause a high or affect a fetus, that's all it takes to yield a positive drug test, Healthline reported. Unfortunately, there’s no way to know exactly how much morphine is that poppy seed dressing or baked goods. A bill introduced to the Senate in April 2019 would regulate the amount of opioid that ends up in poppy seeds sold to customers. Until then, it’s a guessing game, and some pregnant women might feel more comfortable avoiding it altogether. However, Dr. Herman says in moderation, there really shouldn’t be much concern. “I am just fine with my pregnant patients consuming poppy seed bagels or baked goods, but let’s not enter a poppy seed eating contest,” she says.

If you are planning on taking the cautious route, make note of the foods you’re eating and try to use alternatives like nuts or sesame seeds when you’re craving that crunch. Luckily, pregnancy doesn’t last forever. Before you know it, you can go back to throwing all that poppy seed caution in the wind. If you do happen to have a delicious poppy seed bagel, Healthline advises you make sure it’s at least three days before you have to take a drug test.

This article was originally published on May 5, 2018