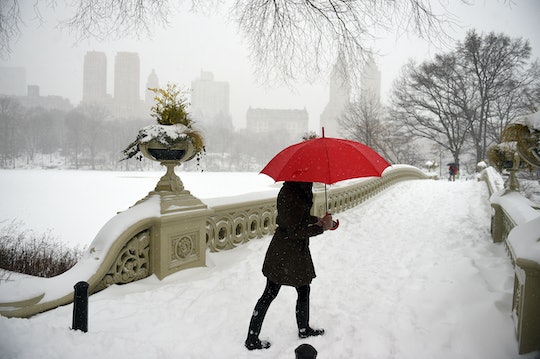 Can You Eat Snow? Plus 5 Other Ways To Take Advantage Of Winter Storm Jonas

Whether you like it or not, if you're in the Mid Atlantic region this weekend, you are properly snowed in. Surviving a snowstorm is all the easier if you go into it completely prepared. You have to anticipate your needs, make sure your bunker is properly stocked and insulated, and you need to know the answers to the really big questions, like can you eat snow? What do you do with all the leftover milk you bought the day before the storm? Are there enough Law & Order episodes on Netflix? There are so many things to consider when it comes to dealing with a blizzard.

Like most things, how you deal with snow depends on where you come from. For example, snow is actually safe to eat. According to NPR, if you catch snow just as it begins to fall, the levels of sulfates, nitrates, formaldehyde or mercury are all at very low levels. So it's mostly just water. But if it's windy or you live in an urban area, whatever you do: do not eat the snow. It can pick up whatever's floating around in the air, like gasoline exhaust and other pollutants. Even in the suburbs it's probably not a good idea to let your kids eat snow. But that doesn't mean that some people don't do it. There are a whole bunch of snowhacks to help you make the most of the weather.

But if you can find some pure snow (or aren't worried about carcinogens for some reason), you can always make snow cream. It's actually a thing in some parts of the country. Mix together some fresh snow, sugar, milk or cream, and a little vanilla. Boom — instant blizzard snack. You can even make it healthy, with soy or almond milk. Or bourbon. Snow cream sounds like something you should put bourbon in.

Put A Towel On Your Car

This is how you know you're a grown up. As soon as you see that it's coming down, you can put a towel on your windshield so the next morning, you can just peel off the snow instead of scraping it.

If your power goes out and you start to freak out about all the food you stocked up on you can just put them in a cooler or directly in the snow. Don't waste that milk!

You Don't Need A Sled

It's actually quite genius. And dangerous. Wear a helmet.

Don't Be A Rookie

It's all going to be ok. With a little common sense and a lot of Internet bandwidth, you can take on Winter Storm Jonas.