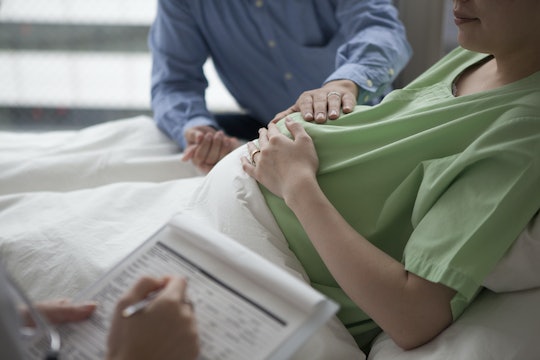 Can You Eat While You’re In Labor? Here’s The New Rule About Dining & Delivering

Maternity wards have seen many evolutions of restrictions and rules, depending on the era. And it’s only been in recent years — say the last decade or so — that practitioners started questioning some long-standing yet scientifically questionable standards of labor, progressively becoming less restrictive and more open-minded. One of the biggies is the age-old question: Can you eat while you’re in labor?

Traditionally eating was seen as a big no-no, and it has nothing to do with nurses and doctors scared of a little poop coming out while you’re pushing. It actually dates back to the 1940s, when Curtis L. Mendelson, a New York-based obstetrician, found that women undergoing general anesthesia for C-sections were at risk for Mendelson’s syndrome, a fatal scenario when the food in a woman’s stomach aspirates into her lungs.

But times have changed, especially when it comes to obstetrical anesthesia. Most women who get C-sections receive regional blocks like epidurals, which wouldn’t cause Mendelson’s syndrome. In fact it’s estimated that less than 5 percent of C-sections in the United States use general anesthesia, and a recent Cochrane study showed no benefits or harms to food or fluid restriction in low-risk labor, so much that researchers concluded there’s no justification for the food ban.

And yet it took until 2009 for the American Congress of Obstetricians and Gynecologists to issue updated guidelines on the topic, finally allowing patients to drink clear liquids. Even still, solid foods are currently on their don’t list, along with many hospitals around the country.

Robert Gennaro, an OB-GYN in Stamford, Connecticut, told Pregnancy & Newborn magazine that although he’s seen “less than two percent” of his C-section patients receive general anesthesia, “there’s always that risk.” And hospitals — especially U.S. hospitals, where the C-section rate is so high — are less likely to take that risk, even if it’s a one in a million chance. “The problem with eating during labor comes down to this — at what point do you draw the line?” Gennero said. “If you knew everything would go according to plan, then sure, it would be fine to eat. But if you have an emergency and your epidural isn’t working well and you need that anesthesia, it’s just not good to have a stomach full of food.”

That’s a pretty fear-based approach to labor, and an issue that most laboring women — including women who need emergency C-sections — won’t have to worry about. Which is why outside the traditional hospital settings (and sometimes even in certain hospitals under specific conditions), the attitude toward eating during labor is changing.

“Birthing is like running a marathon; no one would ever consider asking that much of their bodies without fueling it properly,” Suzie D’Angelo, a doula at Hudson River Doulas in New York, tells me. “Truthfully a mama gets to a stage where she’s no longer interested in eating, but up until then, sometimes all it takes is one almond or dried piece of fruit to get her through an amazingly physical and emotional feat. I’ve not been to a single birth where the mom and her partner haven’t brought energy snacks and drinks to help them both throughout the birth.”

I know I brought snacks to my birth, which was in a local birth center (generally known to be more lax about the “rules” of labor than a hospital). Even so, the only thing I could stomach eating or drinking was the age-old ice chips — which I immediately spit out onto the floor. My contraction would peak, leaving me dry-mouthed and dehydrated, so I’d ask for an ice chip. I’d suck on the ice chip for a few seconds, until the nausea hit, and then spit them out, shooting them across the room at times. That’s the reality of labor. Hunger was the last thing on my mind. But perhaps the food I ate during early labor and the night before helped fuel my 21-hour delivery.

"Once you're in active labor, don't have a whole meal, but try to eat something once an hour, even if it's just two bites,” Deena Blumenfeld, childbirth educator at Shining Light Prenatal Education, told The Stir. “This will keep your blood sugar consistent and your energy levels up. To stay hydrated, take a sip of water between contractions.” Blumenfeld suggested packing some peanut butter and jelly, “since it has sugar and protein for both short and long-term energy.” Plus it doesn't need to be refrigerated — a luxury many hospitals won’t offer.

It’s hard to know just how eating and drinking will affect your labor. Some women need a small snack to boost energy and stave off nausea, while others would gladly avoid food. And, as with so much about labor, much comes down to your hospital or birth center’s policies, and your own individual risk factors.