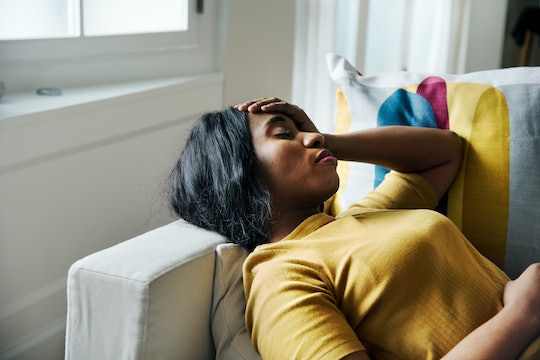 It's been a long day. You're tired, you're jumpy, and everyone seems intent on fraying your very last nerve. You have ground your jaw so hard you have a tension headache. Your stomach is in knots, your fists are clenched, and you feel like you could jump out of your skin at any moment. Can you feel stress hormones being released? Because you're pretty sure there is some noxious combination happening in your body right now.

The Annual Review of Psychology noted that stress hormones play a key role in adaptive stress responses, but that they can also serious clinical conditions if they are "hypersecreted," meaning that they are repeatedly forced to be released whether over the long term in high stress environments or periods of acute, intense stress. The researchers wrote that often, this can lead to depression and anxiety disorders, and the treatment of these ailments is often difficult.

And the results of stress are not only mental, they're physical. The American Psychological Association (APA) reported that during periods of stress, "the muscles tense up all at once, and then release their tension when the stress passes." With chronic stress, the APA noted that when the body is forced to endure stress over a prolonged period of time, it is prone to headaches and musculoskeletal pain.

I contacted Dr. Clifford Segil, neurologist at Providence Saint John's Health Center in Santa Monica, California, and asked him about how much of the stress hormones we can actually feel, or if we just feel their effects on our bodies. He tells Romper that the answer is quite a bit more complex. “Hormones are chemicals in our body released in one part of our body that work in other parts of our bodies." Which makes their effects a bit more confusing. "For example, there is a thyroid gland in your neck which releases hormones which work in other parts of your body. Some of these hormones work on the ‘fight-or-flight’ or ‘rest, relax, or digest’ parts of nervous system of the sympathetic or parasympathetic nervous systems," he says.

Segil notes that "you can’t feel the release of these hormones like you would feel the release of water from your eyes as tears, but some of these hormones may cause people to feel sweat on their skin." Basically, you're not suddenly going to get a rush of dread in your general kidney area and be able to think, "darn you, cortisol!" That is what makes hormonal response so tricky. "Hormones are a very large group of substances, and they trigger different physiological functions. The problem is when someone is stressed out, there is no way to determine what percentage of their ‘stressed out effects’ are due to the stress hormones or the product of these hormones." Stress hormones can trigger that flight-or-fight response, but that flight response might trigger more panic, creating a loop. Or, it could also trigger the fight response, which could trigger a black eye," Segil says.

In people like me who have an anxiety disorder, Segil says, "Studies have been done that follow stress hormone levels in people’s blood, and even in these studies it is hard to correlate being ‘stressed out’ or anxious with blood levels of these hormones." They simply cannot tell which is the cart, and which is the horse, and who is pulling who. He does mention that science is progressing, and that one day, we might have a better idea about why our bodies and brains react to hormonal regulation and dysregulation the way that they do, but right now, there simply isn't enough data to determine what precisely is going on.