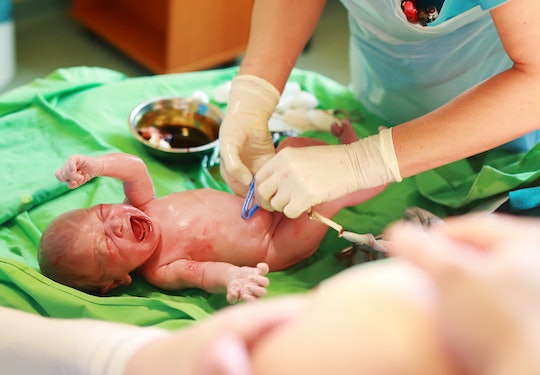 I think it's safe to say that most women think through everything related to pregnancy and childbirth. Details are scrutinized, questions are asked, and plans are set, right up until the moment that baby is out and in the world. The moments following childbirth really don't get as much attention as the moments leading up to them and, honestly, that might not be the best thing. So what happens when your baby is finally on your chest? More specifically, can you feel the cord being cut? I mean, up until that point it's assumed you've felt enough pain and discomfort already, right? I'd say that's reason enough to separate fact from fiction and gain a little peace of mind

First, it's important every pregnant woman understands exactly what the umbilical cord is and what it does. According to WebMD, the cord is a "tube-like structure that carries food and oxygen from you to your baby while you’re pregnant. It also carries waste products away from the baby so your body can get rid of them." When your partner, nurse, and/or designated cord cutter is ready to cut the cord and sever the physical, vital connection you and your baby have shared for 40 weeks (more or less), the last thing you want to be worrying about is whether that's going to hurt. Thankfully, there's absolutely no need to worry. WebMD goes on to say that, just like your hair or fingernails, there are no nerves in the umbilical cord so you and your baby won't feel anything when it's cut. The entire process will be like getting a haircut: you'll see a cut being made, but you won't feel a thing.

Once you have given birth, your doctor may choose wait a few minutes before cutting the cord in order to let the umbilical cord bring more blood to the baby and increase his or her oxygen supply. According to Family Education, the cord will then be clamped at one centimeter and four centimeters from the baby's belly, then cut between the two clamps to minimize, well, the mess.

On the subject of tidying up loose ends after you give birth, there are a few other things that have to happen after your baby makes their grand entrance into the world. After you've given birth and the cord is cut, Parents says you'll deliver the placenta along with any other tissue that was left over from the birth. Attached to the placenta will be the remainder of the umbilical cord, so that will get thrown away with medical waste at the hospital and you won't have to think about it again.

That icky cord that's stuck to your baby's belly has to be kept dry until it dries up completely and falls off. After about a day, your baby's cord will turn from white to black, kind of like a scab. According to BabyCenter, about a week or two later, the cord will fall off and that's when you can give your baby their first "real" bath, instead of just a sponge bath.

Some women choose not to have the umbilical cord cut at all, opting, instead, to allow the umbilical cord to separate from the placenta naturally. This is called umbilical nonseverence, or a Lotus birth, and takes about 3 to 10 days to happen on its own. Lotus births are more common in Buddhist and Hindu faiths, although there isn't any established medical benefit to the practice.

In the end, it's important to remember that cutting the cord will not hurt you or the baby. It's just part of the childbirth process that signifies the end of pregnancy and the beginning of parenthood.

More Like This
30 Marvelous Baby Boy Names That Start With “M”
53 Rainbow Baby Names Filled With Hope
Can You Have Sex With Placenta Previa? Experts Explain
10 Ways Breastfeeding Is Good For Moms, Too