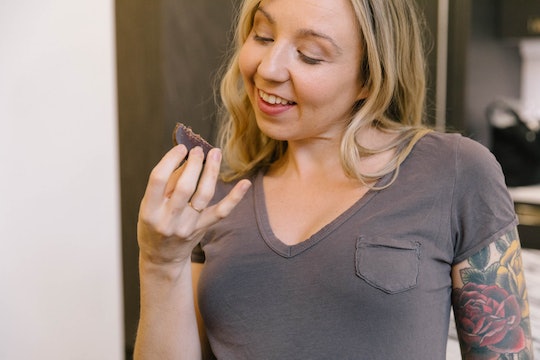 Here's How "Too Much" Weight Gain *Could* Impact Your Pregnancy

During a typical pregnancy, weight gain is expected. The added pounds are a necessary part of that 40 week (more or less) journey, essentially reminding you that your baby is growing and thriving. And while "eating for two" is an often regurgitated trope, a balanced diet is ideal when ensuring you and your baby are fully nourished. But can you gain too much weight when you're pregnant? While it's your body, and how and what you eat is always your decision, experts do have some guidelines pregnant people should consider following.

Board certified OB-GYN and Rowe Telemedicine Network provider, Dr. Sameena Rahman, tells Romper via email that pregnant women can gain too much weight. "The old adage of 'eating for two' is actually incorrect. Our guidelines are based on the Institute of Medicine and studies that have demonstrated an adverse impact on pregnancy outcomes," Rahman says. According to a 2015 study from the Centers for Disease Control and Prevention (CDC), almost half of pregnant women in the U.S. put on too much weight throughout their pregnancy. The study, which consisted of more than 3 million pregnant women between 2012 and 2013, compared height with pre-pregnancy weight and post-pregnancy weight (of 37 weeks or more) within 46 states, including the District of Columbia. The results proved that pregnant women who gained "too much" weight were at increased risk "for macrosomia, postpartum weight retention, future maternal obesity, and possibly future childhood obesity."

Dr. Kecia Gaither, MD, MPH, FACOG and Director of Perinatal Services at NYC Health + Hospitals/Lincoln, Bronx, New York, tells Romper via email that obesity is a risk to both mother and baby because it, "increases incidence of gestational diabetes, hypertensive disorders, and the risk of having a large baby — and all the attendant risks which go along with that — like shoulder dystocia, or increased need for cesarean delivery." She goes on to add that "obesity in the postpartum period for a woman who has had a cesarean confers an increased risk for wound infections. So, yes. Too much weight gain can be a peril to pregnancies."

The Body Mass Index Chart is widely associated with measuring weight in conjunction with height, which helps determine whether a person is in a "healthy" weight range. However, the numbers alone aren't enough to determine whether or not the weight you've gained is beneficial or harmful. The Institute of Medicine's guidelines regarding weight gain during pregnancy say that those who are underweight before pregnancy (a BMI below 18.5), should aim to gain somewhere around 27 to 39 pounds over the course of nine months. Those within a "normal" weight range before pregnancy (BMI between 18.5 and 24.9) should gain 25 to 35 pounds, and, because of the associated health risks associated with gaining too much weight, those considered overweight beforehand (a BMI between 25 and 29.9) should try to gain 15 to 25 pounds during pregnancy.

And finally, if your BMI rests in the "obese" category prior to pregnancy (a BMI of 30 or more), 11 to 19 pounds of pregnancy weight is the recommended range. Dr. Rahman agrees, adding that aside from the negative health risks already mentioned, "babies can end up being bigger than expected (large for gestational age which is considered > 90 percent or more than 4000g at term for instance) and this can lead to issues with delivery and damage at the time of delivery and bleeding postpartum (hemorrhage)." Dr. Rahman goes on to add that, "Babies can have transient low blood sugar and, in some cases, bigger babies have been associated with childhood obesity which has its own risks! So while we can give in to our cravings in pregnancy, we still need monitor ourselves to ensure a healthy outcome!"

As far as how many more calories you need to provide for your growing baby, The American Pregnancy Association (APA) suggests as little as 300 extra calories (up to 450) during the second and third trimester for a pregnant woman who would typically consume an average amount of daily calories. This means, according to EatRight.Org, the first trimester doesn't require additional calories and the foods should be nutrient-dense, such as whole grains, lean protein, fruits and vegetables.

In terms of other health risks associated with weight gain, Dr. Julie Scott, an OB-GYN and medical director of labor and delivery at University of Colorado Hospital, tells Parenting that high cholesterol (which can lead to potentially life-threatening hypertension) plays a part in a woman's pregnancy health, too. Regardless of weight, your cholesterol may be higher during pregnancy because your baby uses that cholesterol for healthy brain and limb development. "We don't often actively treat high cholesterol in pregnant women unless there are extreme concerns for cardiovascular risk," Scott says, adding that "pregnancy is a small window of time in a woman's life, and the potential to cause harm to the fetus must be weighed." Again, the best remedy for better LDL and HDL numbers is to stick to a well-balanced meal plan.

Regardless of what the scale says, there's no such thing as an "ideal" body weight, pregnant or otherwise. And a person's weight is never an indication of their health, so it's impossible to look at a pregnant woman and automatically know whether or not she's experiencing pregnancy complications. Gaining "too much" weight during pregnancy doesn't necessarily mean you will experience any negative side effects, or put you and your future baby at risk. Likewise, your pre-pregnancy weight doesn't always dictate your pregnancy's outcome. Every woman and every body is different, so talk to your doctor if you're concerned with the amount of weight you've put on and/or how weight might affect your pregnancy.