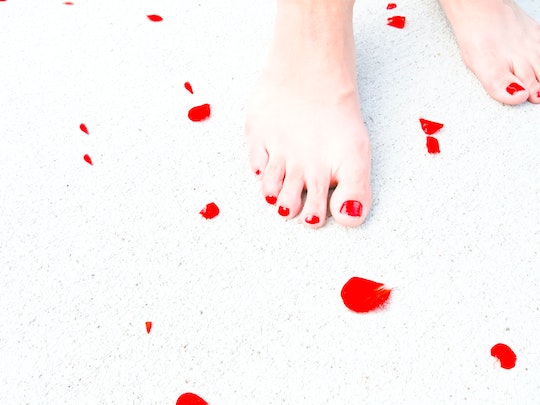 Can You Get A Pedicure While Pregnant? Lord Knows You Deserve One

If you scroll through the results for the #momicure tag on Twitter, one thing is clear: moms like to keep their nail game on point. And who can blame them? Social media is overrun with images of every kind of nail design imaginable, and moms still want to take part in this fun, colorful trend. But what about moms-to-be? Is it safe to get pedicures while pregnant, or should they completely avoid nail salons for nine months?

Like most health-related pregnancy questions, this is a matter of choice, and each woman’s degree of risk aversion will vary. Some eschew nail salons, polishes, and polish removers entirely, while others will hold on to their standing pedi appointment with no trepidation. It’s a personal matter, even if the so-called pregnancy police try to get involved.

So to help you make the best informed decision, here is a rundown of current facts, opinions, and advice concerning salon pedicures for pregnant women. Some of it is common sense (avoid sketchy salons where the hygiene seems questionable), and some of it will surprise you. Once you read through, you’ll have all the info you need to decided whether or not you want to get your nails done during pregnancy.

The Lowdown On Nail Salon Toxins

We’ve all been inside (or at least walked past) nail salons where the fumes were strong enough to make your eyes water. And it’s no surprise that some of those strong smelling chemicals may not be great for your unborn baby. According to the Occupational Safety & Health Administration, there are hazardous chemicals in nail salon products that may affect pregnant women and their unborn child, including Ethyl methacrylate and toluene. Although more study is needed to draw further conclusions, a statement from the Agency for Toxic Substances & Disease Registry states that some mothers who breathed large amounts of toluene during pregnancy have had children with birth defects, including retardation of mental abilities and growth. Obviously you would not get that same amount of toluene while getting a quick pedicure, but the findings can still be troubling to expectant women who don’t want to risk any harm whatsoever.

The Benefits Of Pregnancy Pampering

Plenty of women still get pedicures while pregnant. In fact, a pedi in your last trimester may help soothe tired feet and increase circulation. And some spas even cater to moms-to-be exclusively, while others offer packages with pedicures.

So if you still want to get a professional pedicure, consider bringing your own tools to the appointment to reduce the risk of infection and opting for a non-toxic nail polish. If you plan on regularly treating yourself to pedicures, you may want to invest in some polish by Knocked Up Nails, which is specifically formulated to be safe for pregnant ladies.

As long as you’re a pampering yourself in a pregnancy-safe way, feel free to get as many pedis as you please.