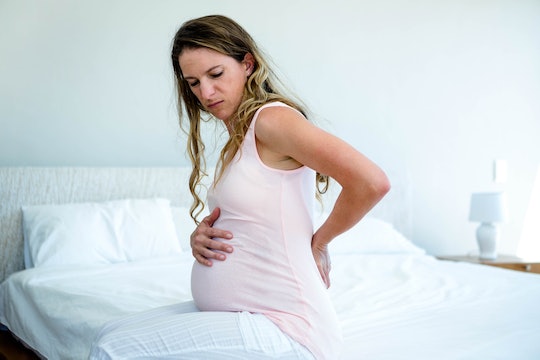 Here's Why You Might Actually Feel Lightning Crotch All The Way In Your Butt, Too

The mechanics of my pregnancies left a lot to be desired. Not only did I have crippling morning sickness, pains from the hormones, and more heartburn that I thought was possible, but towards the end of my pregnancy, I developed a much more disturbing symptom. Commonly referred to as "lightning crotch," I began experiencing shooting pains that radiated from my vagina and outward in an arc of pain I can only describe as electric fire. And it did radiate. I felt it all through my undercarriage. But, can you get lightning crotch in your butt? Or was that something else?

Lightning crotch is the colloquial term for the shooting pains in the lower pelvic region during the last weeks of pregnancy, according to Women's Healthcare Associates. Unfortunately, because the nerves in the region are so closely linked to the nerves of your colon, rectum, and anus, it can be difficult to distinguish the pain from one area to the next, and radiation of pain is not uncommon, as per Medscape. The article noted that it's because they share the same visceral innervation, which means the pain receptors are shooting into the same location on the spine, which can make determining the location more difficult, especially between areas so closely linked as the vagina and rectum.

Any woman who's ever worried about pooping or who has pooped on the table during labor knows how closely the feelings are related.

When I brought this up with my OB-GYN, she assured me that it was quite normal, and it meant I was getting closer and closer to having my baby. When I was (trying to delicately) inquire as to whether or not you could get lightning crotch in your butt, she told me something I should have expected. Because I have endometriosis, not only is lightning crotch more pronounced and painful for me than for other mothers with less scar tissue in their cervical area, but because there was so much cervical and rectal intertwining with my scar tissue, the pain in my a*s was going to be more extreme.

Lightning crotch wasn't debilitating, but it was a pain that could catch you off guard. As many women do with their pain, I mostly brushed it off after I learned what it was. However, I was instructed to call if there was any bleeding, leaking of fluids, or other encroaching symptoms because I was already getting ready to deliver. While the symptom of lightning crotch/butt alone was not concerning, multiple symptoms can be, as per Women's Healthcare Associates.

I spoke with registered nurse and doula Shelly Jobrani of Michigan, and she tells Romper that it's not uncommon to feel the same shooting pains in your butt that you do in your vagina. "The wall between the two areas is very thin, and the nerves are closely related. It's the same thing as when some women feel pain in their rectum when they get cramps. Some women experience the shooting pains of pre-labor in their rectum as well." She says that lightning crotch really encompasses your whole crotch area — vagina, vulva, rectum, and anus.

If your downtown is feeling decidedly down, it's likely just the irritating pain of lightning crotch, but if you're worried, by all means, call your provider. Jobrani notes that "if you see blood or feel anything protruding from your rectum, you should call your provider, because it's likely a problem with hemorrhoids," another common complaint of pregnancy. They can be painful and itchy, which isn't a feeling associated with lightning crotch.

And while lightning crotch can mean that labor is approaching, don't start driving to the hospital just now. Those pains can actually go on for weeks.