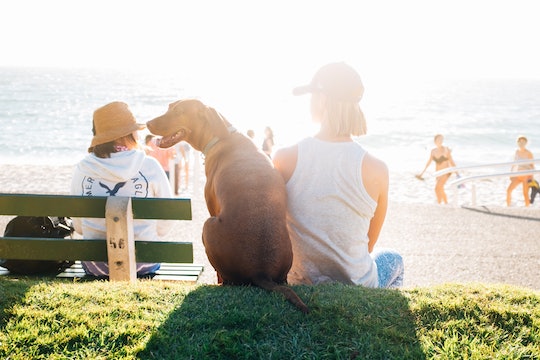 Yep, Some Pet Parents Can Get Paw-rental Leave

Sometimes, having a new dog — especially a new puppy — can feel like having a toddler in your home. Between the messes, the potty training, and teaching them the word "no," being a parent to a puppy can be a full-time job. But while training a new puppy can be difficult, can you actually get parental leave if you have a pet? Unfortunately, in the United States, people already have a hard enough time getting paid paternity leave for their biological children — but one company has already implemented a pet leave policy.

Those first few months with your new animal can be absolutely magical — it is the time where you're learning all the little adorable quirks about your animal and that make it part of your home and more than just a four-legged friend. More than that, your new pet is probably really cute — and having to be at work all day, while your cute pet sits at home, is a major distraction. This is when parental leave for new pet-parents might seem extremely helpful.

Unfortunately, there is no official pet-parental leave in the United States for new owners. However, one Scotland-based brewery — BrewDog, which is opening a new brewery in Columbus, Ohio — is quickly becoming a trailblazer in the United States, becoming the first to offer parental pet leave, something, it seems, few others offer at the moment.

The brewery is offering one week of leave to all employees when they get a new dog, according to Brew Dog's website. This is on top of the already super sweet perk of working for the brewery, which allows employees to bring their furry friends to work with them, whenever they want. Because just in case one week with their pup wasn't enough, the employees can now be around their dogs all day. Talk about work benefits.

According to the brewery's website, bringing dogs to work and being able to take off when a new pup joins the family is helpful to everyone, just as regular parental leave is helpful to new parents everywhere:

Yes, having dogs in our offices makes everyone else more chilled and relaxed — but we know only too well that having a new arrival — whether a mewling pup or unsettled rescue dog — can be stressful for human and hound both. So we are becoming the first in our industry to give our staff a working week's leave on us to help settle a new furry family member in the home.

Spending time with a brand new pet, away from work, would be an absolute dream for a lot of new pet owners. Luckily, one company in the United States is making this a lot easier — and hopefully others will follow suit, both in terms of parental pet leave and parental leave period.