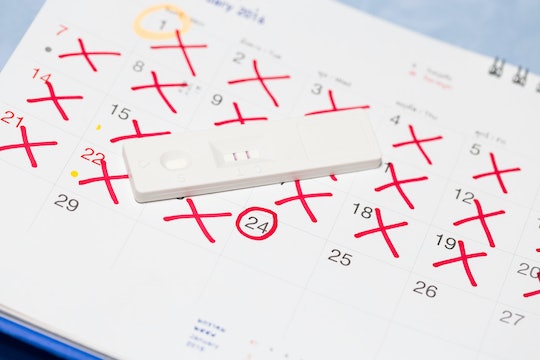 Can You Get Pregnant Before Ovulation?

Did you know that a woman ovulates for mere hours during each cycle? But don't worry, that doesn't mean you have only 24 hours per month to conceive. If you're trying to get pregnant, you're probably tracking your most fertile days, which are the days leading up to ovulation, the actual releasing of the egg during ovulation, and 24hours after ovulation. All this math ay have you wondering, "can you get pregnant before ovulation."

Well, there's good news for all you baby-makers out there. According to the American Pregnancy Association, you can get pregnant before ovulation. In fact, as Parents reported, your chances of conception are "good," during the pre-ovulation phase, which occurs around day seven of your cycle. (Day one is the day you start your period: this is fertility tracking, by the way.) In the pre-ovulation phase you should start doing two things if you want to get pregnant: first, check your undies for cervical fluid, and second, have sex.

In the pre-ovulation phase, your cervical fluid is beginning to get creamy, and as the days of your cycle progress, will eventually turn into the stretchy egg white cervical mucous that signals ovulation, as noted the American Pregnancy Association. Additionally, Parenting pointed out that the in days before you ovulate, your cervical fluid begins to thin out, and is moist and sticky. Vaginal sensations are heightened, and your sex drive increases. This is a bonus, because having sex during the pre-ovulation days can help you conceive.

"One study showed that people who had sex only one time during this phase, even four to five days before ovulation, still got pregnant," reproductive endocrinologist, Dr. Steven R. Bayer told Parents. So, definitely give sex a shot before you ovulate. And, because sperm can live up to five days inside the female reproductive system, noted the American Pregnancy Association, you can increase your odds of conception if you get it on before and during ovulation.

Certified physician assistant Barbara J. B. Clark told Parenting that aside from tracking the days of your cycle on a calendar, women trying to conceive should check their cervical fluid. Such a task can help a woman feel like she's using her body's natural signals to tell her when her most fertile days are, an empowering thing to do that might help you feel more in control of this whole baby making process. Your dewy cervical fluid makes for great lube when you have sex, so pre-ovulation sex feels really good (score). Just because you're doing it to make a baby doesn't mean you shouldn't enjoy yourself in the process.