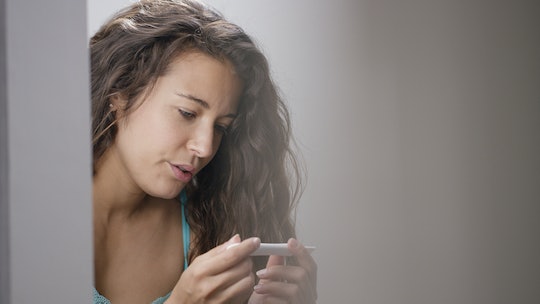 Can You Get Pregnant If You Aren't Menstruating?

Oh the wonderful world of a woman's cycle. It's enough work to simply track when you're going to get your period each month. But if you're trying to avoid getting pregnant (or, conversely, trying to get pregnant,) there's even more to track. Knowing what times of the month you're fertile and what times you're not will save you a lot of headache — and probably pregnancy scares — in the long run. Wondering if you can get pregnant if you aren't menstruating is a common question among women. And it's an essential one to ask, because the answer can mean the difference between a baby or no baby.

To clarify the complexity of our reproductive systems further, I reached out to Angela Le, fertility expert at Fifth Avenue Fertility Wellness in New York City, NY. She noted that for women with normal, 28 day cycles, you can expect to ovulate about 14 days before the start of your next period. "Your fertile windows will most likely be five days before and 24 hours through the ovulation period," she says. "This window accounts for six days of your cycle."

For women who aren't on a hormonal birth control (myself included), keeping track of their cycle is key. According to the American Pregnancy Association (APA) women are fertile during their ovulatory phase. This means that having sex on the day you ovulate (or anytime during the fertility window) could lead to a pregnancy, since sperm can live for three to five days, even though the egg is only around for about 24 hours. Le also noted that, "to be safe, it is also a good idea to add a few days on either end, as ovulation can be unpredictable."

So in short, you will be ovulating and not on your period when your body is able to get pregnant. However, every woman's body is different and knowing exactly when you are ovulating can be a tricky process, especially if your periods are irregular or you have other hormonal issues like polycystic ovarian syndrome (PCOS.)

For women who haven't had a period in a while, it can be even harder to determine when you're going to be fertile. According to Early Pregnancy Tests, women with irregular periods can certainly still get pregnant. The article suggested measures you can take to help regulate your cycle through healthy diet or fertility supplements, since tracking your fertility is much easier with a regular cycle.

Every woman has to decide what works best for her in terms of birth control and fertility monitoring. Barrier methods like male and female condoms are the preferred method for some. Other women prefer a hormonal birth control that will prevent pregnancy altogether, taking the worry out of the equation. Other women track their cycle themselves. I use a fertility monitor that takes my basal temperature each morning, helping me know where exactly I'm at in my cycle and whether or not I can get pregnant.

However it looks for you, knowing more about your cycle and when you can and can't get pregnant is important — and empowering — for every woman.