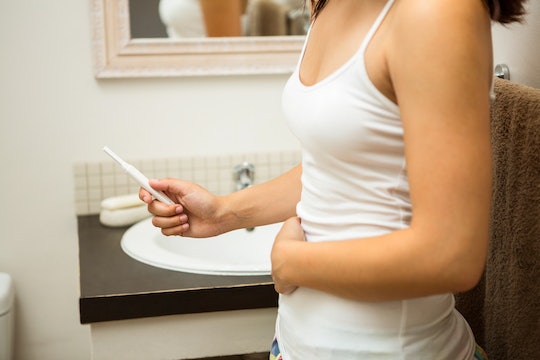 Can You Get Pregnant If You're Not Ovulating? Science Explains

There are a lot of myths about how you can get pregnant. Personally, I think more than a few are easy to believe because sex education is still, in the year 2017, lacking in this country. And since reproductive health is rarely discussed openly and honestly, many women don't know how to tell and/or don't notice when they're ovulating. So, can you get pregnant if you're not ovulating?

The very short and definitive answer to that question is no. You cannot get pregnant if you are not ovulating, according to New-Kids Center, a site dedicated to health information for pregnant women, babies, and kids. Turns out, ovulating is the key to the whole insemination process, which essentially kicks off pregnancy. There are, however, medical options made available to women that don't require ovulation when attempting to get pregnant. For example, using In Vitro Fertilization (IVF) doesn't require a woman to ovulate, but instead uses a "process of fertilization by extracting eggs, retrieving a sperm sample, and then manually combining an egg and sperm in a laboratory dish," according to the American Pregnancy Association (APA). Guys, science is rad.

For those of you who aren't familiar with ovulation, don't fret. The APA defines ovulation as the moment "when a mature egg is released from the ovary, pushed down the fallopian tube, and is made available to be fertilized."

Two hormones are key to ovulation happening and happening correctly. A spike in estrogen is needed to ensure the egg is released. According to the Women in Balance Institute, estrogen causes a surge in the level of luteinizing hormone and the follicle-stimulating hormone that helps the mature egg be released. Progesterone, on the other hand, is important after ovulation. Women in Balance explains, reporting:

How do women not know exactly when they're ovulating? According to LiveScience, "Many people mistakenly believe ovulation always happens exactly 14 days after a woman's last period. Turns out, the timing varies for each woman, usually falling between days 11 and 21 of the menstrual cycle. 'Most women have no idea when they ovulate,' said Dr. Christina Ramirez, an obstetrician and gynecologist in Garden City, New York."

The reason some people still get pregnant when they don't know when they're ovulating is because sperm can live in a woman's body for up to five days, according to WebMD. So as long as the egg is released during those five days, it can be fertilized. You don't necessarily need to know for certain exactly what day you are ovulating in order to get pregnant, but you need to know the most fertile window in order to have intercourse during that time, as reported by the APA.

In order to know when you're ovulating, you have to know how to count the days of your cycle and when you will likely be ovulating. LiveScience explains further, reporting the following:

"Precise ovulation timing is challenging. In general, women usually ovulate around 10 to 16 days before the next period cycle start. Counting can confuse numerous women. To set the record straight, the first day of a menstrual cycle is the first day of menstrual bleeding. Once bleeding stopped, ovulation will occur some time within the cycle. Wait for another 10 to 16 days and a woman will menstruate again."

One place to start is with an ovulation calculator, where you plug in the date of the start of your last period and how long your cycle usually lasts in order to see your likely fertile period each month. If you are trying to get pregnant and have not been succeeding, consider picking up an ovulation predictor kit to learn more about when you are actually ovulating. If your cycle is longer or shorter than the typical 28 day cycle, an ovulation predictor kit will likely help you pinpoint when you are most fertile.