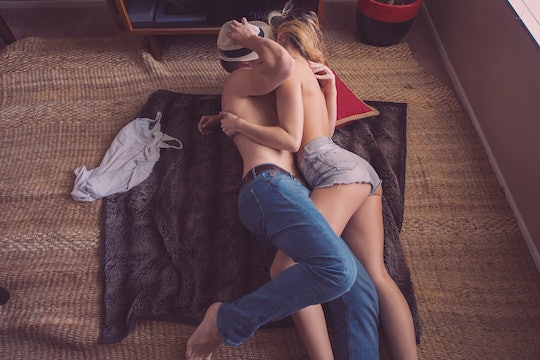 Yes, You Can Get Pregnant If You're On Top

It's a common theme in the trying to conceive message boards and among women who are wanting to start or expand their family — which position should you and your partner be in to get pregnant? Especially if you have a favorite position, like being on top. But can you get pregnant if you're on top, or does gravity work against you?

I know when I was trying to get pregnant, I was all over the map on this one. At the time, most of "the boards" I was involved in all called for the man-from-behind mating style coupled with elevated hips, and pricey get-pregnant pillows. After all, I wanted all of my husband's swimmers swimming in the right direction. This was all anecdotal evidence and old wives' tales, to be sure, but lots of old wives were once young wives who got knocked up, so at least some of them must be right.

The craziest piece of advice I ever received was from my grandmother. I called her one night after I'd been trying to get pregnant for a year, and I was feeling down. When I told her why, she said "Oh, you're just being silly, and you're too young to worry, I'll tell you what. You get pregnant when you're having fun, not worrying about it." Her judgement was probably sound as she had her first child at 16, and her last at nearly 45 years old. (My mother tells me she and my PawPaw had embarrassingly loud, fun, like-clockwork sex every week at least. Thanks for that visual, Mom.)

Riya Patel is a reproductive therapist in Edinburgh, U.K., specializing in alternative techniques for getting pregnant. She tells Romper in a phone interview that there is a very good reason why there's not a lot of research done about sexual positions and pregnancy, and it's because sperm are designed to do one thing: swim — and they do it well. She remarks that yes, gravity may be a factor in how fast your partner's soldiers make their way to the front lines, but it only takes one. She also notes that the special gel that surrounds the semen, and the lubrication in the woman's vagina, work together, and that tiny contractions propel those swimmers to their destination.

Patel also tells Romper that semen does not mess around — it's like it's shot out of a cannon, really far and really fast, because sex and human reproduction in general does not lend itself to quiet and controlled interludes. "It's called a mating frenzy for a reason," Patel says. She went on to note that if one position were far superior than others, then our bodies would naturally want to find that position when women ovulate, but that's not the case. Women seek pleasure as do men.

Patel does say, however, that there is real evidence that women who are relaxed and have a good time while trying to conceive are more likely to get pregnant. So if that means you're on top, or going for doggy style, or missionary, that's the goal. Can you get pregnant if you're on top? Patel says yes. But, you may want to try a few (or a dozen) positions just to be sure which one you're the most relaxed in. You know, for science.