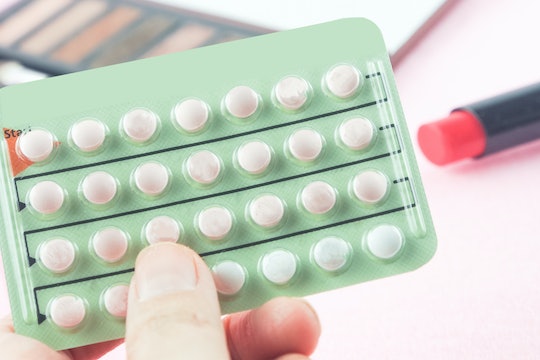 Can You Get Pregnant On Birth Control?

If you're having safe sex and using birth control effectively, you can rest assured that there's a really good chance that you won't end up pregnant . Still, no method is 100 percent effective at preventing pregnancy, except for abstinence. That's Sex-Ed 101. Still, you'd be surprised how many women end up pregnant unintentionally, which is why it's totally valid to wonder, can you get pregnant on birth control?

If you take oral contraceptives, timing is everything. According to the Centers for Disease Control and Prevention, 40 percent of pregnancies in the United States are unintentional. And, as the same study noted, many of these pregnancies occurred even when women were using birth control. What's up with that? Basically, you have to account for human error when tallying up statistics about birth control — or any preventative health measure that's dependent on human behavior. As these numbers show, a woman can slip up and miss a dose or two of her oral contraceptives and birth control can fail.

"Life is busy and complicated for most people, and sometimes having to think about one more thing is too much," OB-GYN Katharine O'Connell told Shape.

According to the Association of Reproductive Health Professionals, only 0.1 percent of women get pregnant on the pill when taken correctly. However, pregnancy rates soar by 30 to 80 times when pills are missed.

Having said that, there are ways you can safeguard yourself from missing a dose of your pill. The same article in Shape noted that women skip doses by simply forgetting to take a pill and neglecting to use a back up method in the aftermath, or by running out of pills before making it to the pharmacy to re-up on supplies.

In June, The New York Times published an article citing the popularity of new apps that allow women to obtain birth control without even leaving their home. By putting women in touch with participating physicians, (in participating states) you could have months worth of birth control pills delivered to your door within hours. The New York Times reported in the same article, that because the risks associated with hormonal oral contraceptives are low, physicians feel totally comfortable prescribing them to women using digital methods. Definitely worth looking into if you rely on oral contraception to keep you child-free for now.