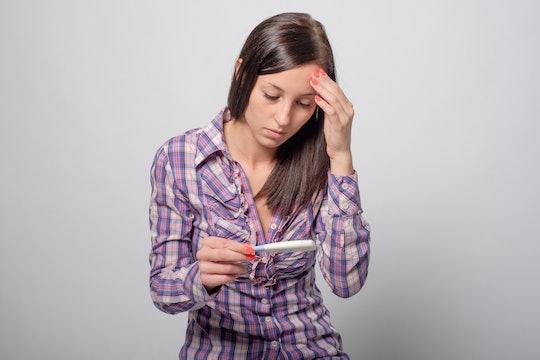 Can You Get Pregnant On Your Period?

If you find yourself wondering about sexual health questions well into adulthood, don't worry. Plenty of otherwise-educated adults still don't know all the facts about sex and pregnancy, particularly if they received a less than stellar sex education in school. Fortunately, it's never to late to learn. For instance, can you get pregnant on your period? Because, regardless of biology, that just seems unfair.

The answer, as is almost always the case with health topics, is: it depends. According to the American Pregnancy Association (APA), you are unlikely to get pregnant on your period. As the APA further explained, your ovulation is probably several days away, so you don't have very high chances of conceiving at this time. What would have to happen for you to get pregnant during your period? If you have a very short (say 22-day) or irregular menstrual cycle, and ovulate a few days after the end of your period, then there is a chance you could conceive, as explained in Baby Center. Why a few days later? It turns out sperm can live inside a woman's body for up to five days, according to WebMD. So if the period-sex sperm is still hanging around when you ovulate, there is a chance you could get pregnant during this window. So overall, using your natural cycle as your only method of birth control could get a bit dicey.

But what if you're on the Pill? You may still have a bit of bleeding every month. According to Planned Parenthood, if you're taking your Pills perfectly (at the same time every day), then you're still protected against pregnancy even during your placebo week. Your odds are still the same: 99 percent or greater chance of not getting pregnant.

What if you want to have period sex anyway? Well, if you aren't on the Pill or other form of birth control, then using a condom would be a good way to lower your chances of a surprise baby. According to Every Woman's Health Centre, condoms are about 98 percent successful at preventing pregnancy when used perfectly. So don't worry: you can and your partner can still suit up and get down.