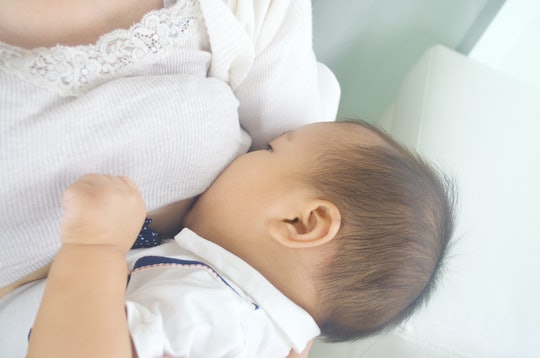 Can You Get Pregnant While Breastfeeding?

One of the oldest assumptions in the new mom handbook (a fictitious, yet extremely useful handbook), is that you can't get pregnant if you're breastfeeding. And although the assumption is partially true, the grey area around the truth makes it a shaky assumption at best. As such, I'd be careful before making it your primary method of birth control. So can you get pregnant while breastfeeding? The answer isn't as simple as most moms wish.

According to La Leche League International (LLLI), the answer is "yes" and "no". If you meet a certain set of standards, breastfeeding is, in fact, a great barrier to getting pregnant. If your baby is less than six months old, your period hasn't started again after giving birth, and you're nursing regularly around the clock (at least every four hours, or six at night,) LLLI noted that you have less than a two percent chance of conceiving. Those are pretty good odds, right? Sort of. There is a caveat that all nursing moms should be aware of.

If you don't meet those conditions, even just one of them, your chances of getting pregnant are much higher. According to Baby Center, many women will start to ovulate again, even if their period hasn't returned, meaning they can indeed get pregnant.

Menstruation won't occur until about two weeks after ovulation, so even if you haven't gotten your period back, you're most likely not in the clear. Although breastfeeding is known to delay the onset of ovulation, according to Breastfeeding USA, your full fertility may return in stages, making it very hard to predict.

So, unless you and your baby meet the strict qualifications above (exclusive nursing every four hours, less than six months postpartum, and you haven't started menstruating again,) it's best to use whatever method of birth control you feel most comfortable with if you're not trying to have another baby.