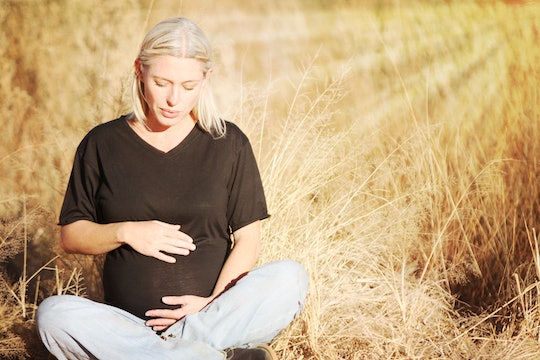 Can You Get Pregnant While You Are Pregnant? The Answer Is Crazy

The answer is mostly no, you can't get pregnant if you're already pregnant. However, there is a phenomenon called superfetation, where a second egg is released and fertilized, sometimes weeks or months after the first. To note: This is extremely rare, with only a few cases reported in medical history, but it theoretically can happen.

In almost all women, as soon as the fertilized egg is implanted, hormones are secreted that shut down any future ovulation and that start a mucous plug being formed at the cervix, serving as a barrier to any sperm who are hoping to enter, according to The Pregnancy Zone. But there have been a few cases, like Julia Grovenburg of Arkansas, where superfetation may have occurred. Julia knew she was pregnant and went for an early ultrasound, where the doctors saw one sac which they were able to give an estimated gestational age. Then they heard a smaller, second heartbeat and discovered a second baby who appeared much younger developmentally.

According to Dr. Karen Doyle, who was interviewed on ABC-TV, while twins may have different sizes at birth, it's unusual for them to have different sizes very early in the pregnancy. Dr. Doyle felt that superfetation was a possible explanation. However, Jeffrey Kuller, M.D. of Duke University told WebMD that he was skeptical that this was the reason. "The only way it can happen is if someone ovulates again after they get pregnant. But usually, the hormonal state of pregnancy is not conducive to someone ovulating again," Kuller says.

While the Grovenburg's case got a lot of media attention when she was pregnant, it was never proven as definitive superfetation. They had been offered to do an amniocentesis to examine the babies' genetic makeup, but they did not want to undertake that procedure as they felt it put their babies unnecessarily at risk and it wasn't going to change anything for them.

There are other possible explanations for being pregnant with two babies of disparate sizes. In the case of identical twins who are sharing a placenta, there have been times when one twin appears to be getting more nutrition than the other. According to The Pregnancy Center, this is called twin-to-twin transfusion syndrome. Sometimes, due to congenital infection or chromosomal abnormalities, the twins may be different sizes because of a growth discordance.

Another rare occurrence happens when a woman releases two eggs at ovulation, but they are fertilized by the sperm of two different men. This is called heteropaternal (different fathers) superfecundation (fertilization of more than one egg). The fertilization could happen at the same time or there could be a day or two in between, but not a difference of weeks or months as there is in superfetation. This requires that a woman not only have a very unusual release of two eggs, but that she also then sleeps with two different men within a matter of a few days. It sounds crazy, but also like it could be a juicy storyline to an entertaining romcom.

The bottom line to this question is that while in theory you can get pregnant while you are already pregnant, even possibly with two different fathers — what? — the odds of it happening are ridiculously small, so don't count on it or be stressed about it.