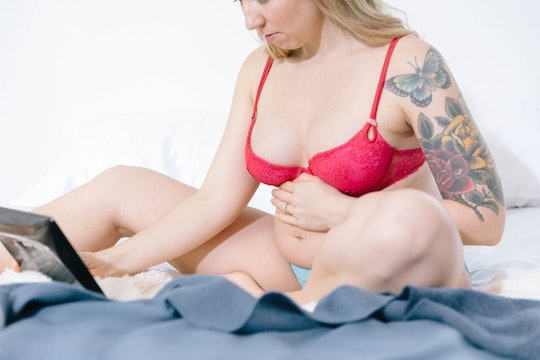 Here's How A Tipped Uterus Can Impact Your Fertility, According To Experts

If you are one of the lucky people, like me, who have been diagnosed with a "tipped" uterus, you may have heard rumors about how this condition can impact your health, sex life, and fertility. Since women's health is rarely spoken about openly and honestly, it's easy for myths to become popular and, as a result, believable. So, can you get pregnant with a tipped uterus? The condition can definitely impact your overall health and wellness, so it's important to take the potential risks into consideration when trying to conceive.

So what is a tipped uterus, anyway? What to Expect explains that while most people's uteri lean forward towards their belly button, a tipped uterus (also known as a tilted, retroverted, or retroflexed uterus) leans backwards towards a woman's spine. According to the same website, a tipped uterus is relatively common, impacting more than 20 percent of people who have a uterus (and most people don't even know they have one).

According the Mayo Clinic's website, having a tipped uterus isn't really even considered a condition or medical problem. As a result, and for the most part, having a tipped uterus won't impact your chances of getting pregnant. The website does note, however, that if your tipped uterus is a result of scarring from surgery or endometriosis, there's a chance it might prevent sperm from reaching their desired destination. In that case, you should talk to your doctor about how your particular condition could impact your fertility.

While having a tipped uterus won't generally impact your physiological ability to get pregnant, it can impact your sex life, which might interfere with the process (if you plan to get pregnant by having vaginal sex, that is). According to the National Women's Health Resource Center, some people with a tipped uterus experience pain during sexual intercourse (often when a penis hits the cervix). Fortunately, for those people, changing positions can often help. If after trying new positions and you still feel pain during sex, though, you should talk to your doctor and explore treatment options.

According to What to Expect, most people with a tipped uterus won't know they have one until they get pregnant and start having symptoms. A tipped uterus can cause symptoms in your first trimester of pregnancy, too, including back pain. It can also press up against your bladder and make it difficult to empty it completely. And because of the way it is tilted, it can make it hard to find your baby during an abdominal ultrasound. Fortunately, according to the same site, all of these symptoms should go away during by your second trimester, since your uterus will shift up as your baby continues to grow.

Having a tipped uterus is totally normal, and for most of us, not a big deal, even when it comes to getting pregnant. If you are worried about how it might impact your health or fertility, though, you should talk to your doctor. In fact, and when you think about it, is a pretty good idea to talk to a medical professional most things involving your reproductive health.